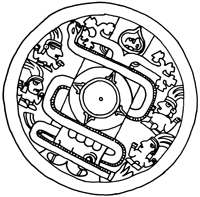 Sometimes going forward requires taking a look back, & slowing down in order to speed up. The Mayan Quincunx reflects the 4 elements & the 4 cardinal point directions. It offers a clear representational line of sight to the chocolate universe whose 4 corners are covered by a) growers/farmers – cultivating & harvesting cacáo; b) geneticists/breeders – applying DNA research with the aim of high-yield, drought-tolerance, disease-resistance &, occasionally, fine-flavor; c) scholars/academics – biologists, archeologists, historians, ethno-botanists, anthropologists, etc., on the cacáo trail; d) bar-smiths/makers – turning cacáo seeds into chocolate bars, i.e., ‘bean-to-bar’ chocolate makers who, some, in their small craft way nurture personal or at least closer working relationships with growers to close the circle & shrink the production chain around the world.

Usually left out & overlooked in this configuration – other than as a buyer &, for the industrial giants, hopefully an ignorant buyer – is the role of you, the consumer as producer, the ‘pro-sumer’ coined by futurologist Alvin Toffler, in shape-shifting the world of chocolate as we know it, thru your actions & purchasing power, placing you at the center in the vertical dimension, transforming the Quincunx into a living breathing nexus of a pyramid.

Consumers of the 21st Century are having their say in shaping outcomes, whether it be GMO, traceability, nutrition, labor practices or the environment. Profit-sharing & decision-making will become more equitable as a result.

The intent is to transcend history & make everyone a stakeholder; to decommodify cocoa beans & move them from the commodity markets into the specialty market. By our estimation chocolate is too cheap. What oil generates on the global commodity market in 1 day takes cocoa a whole year. Doubly so considering the preciousness of its quantity: just 3.5 million tons annually versus sugar’s 165 million. Low price often converts to paying farmers peanuts for it, which contributes to cycles of poverty in the producing world where it grows as cheap fodder for a market controlled by the Big 4 (Cargill, ADM, Barry Callebaut, Petra).

The right kind of consumer demand can alter the situation on the ground at cacáo’s source in a reverse-dynamic dubbed ‘bar-to-bean’™, in the spirit of pragmatism & activism, & “achieving our chocolate” as it were. This movement is rooted in genetic preservation within diversification, shifting from an industry (preferably an entire global economy too) based on growth & volume geared to satisfying everything we want now at a dirt cheap price… to one that prizes Quality & Prosperity engendering an Ethical Capitalism. It’s a modus vivendi that more is not better… better is better. This demands expansive thinking to lift us from our predicament but, in short, qualia can solve most problems that plague us.

Imagine how David Bohm’s implicate order proposes that a molecule on Venus can affect those on Mars. Or Chaos Theory suggests a butterfly flapping its gossamer wings in the Amazon Rainforest can contribute to a monsoon in India’s arid Tamil Nadu. And Reflexology holds that internal organs are mapped onto hands & feet then accessed thru massage to create a positive feedback of the body’s electro-mechanical grid. If molecules, butterflies & massage can have such unforeseen & far-reaching consequences, what can intentional action do?

A simple declaration raising the bar in belief that a tree – Theobroma cacao – stands alongside the world’s landmarks rather than in the candy bin (where we’ve been snickered into adulterating it). Originally an American botanical, cacáo now has global reach for being exotic, pleasurable, flavorful, healthy & nutritious, not to mention economically valuable. Every year research sheds more light on its physiological, medicinal, & cultural benefits. It can play a role in creating that model for an Ethical Capitalism that builds networks between the producing South & the consuming North based on mutual respect. Neither charity nor pity (the twin pillars supporting a broke system of exploitation <–> patronage <–> dependence that runs in both directions) but the fair & open exchange of goods <-> information / high compensation <-> high quality. In this vision, we promote premium pricing & direct trading, rainforest harvesting where possible, & sustainable agricultural if not, for value-add & wealth creation in emerging economies.

Together we can have our chocolate & eat it too. By demanding premium quality we incentivize growers to preserve rare heirloom cacáo strains. This in turn helps preserve the environment. It also encourages everyone in the production chain to use best practices & to consolidate North-South expertise, particularly in our own hemisphere. Additionally, we bestow recognition on the peoples & places – especially Amerindian communities – responsible for an incredible invention, bringing one of the world’s great plants to fruition. It’s our small, near-native way to help reconcile & advance global relations… building those bridges one bar at a time.

The good news not only tastes good, it’s good for the planet, & good for the collective soul. And cacáo, once literally sacred & noble, then mass-produced & impoverished, regains its former glory. 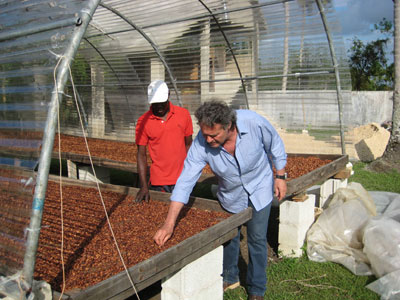 Doing it all / doing it right: bar-smith Danielo Vestri going bud-to-bud™ (cacáo bud to taste bud) at his estate in Bonao, Domincan Republic

With superior quality, farmers can command high prices to climb out of poverty & re-invest back into land stewardship, into infrastructure (paved roads, clean water, health care), schools for their children & the attendant prestige that tending to cacáo is a noble tradition to extol rather than a misery to escape – much as vintners are revered for their harvests. Hopefully, the next generation, armed with advanced diplomas, will want to return to the ‘family business’ in the cacáo groves & apply their learned expertise & knowledge. 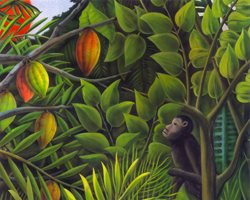 In the meanwhile, farmers have economic pressures bearing down on them & they game the system as much as we devise it; breeders/geneticists focus primarily on productivity & pests rather than flavor; consumers by & large want the cheapest sugar-slain product they can get their hands on. Slowly & gradually this is changing. Yet there are miles to go (thank you Robert Frost) before we sleep, & it falls on us as part of Veblen’s newest leisure class to design a better way. After all, if not us, then who? As the heirs to the fortune living thru the 3rd wave of Western chocolate history, & probably the final phase before it heads into its digital/genetic future when chocolate as we know it becomes a cult item, wouldn’t it be worthwhile to safeguard the treasure before the last seeds are spit out by monkeys & made extinct by Robo sapiens? In retrospect, this could be a golden age, right up there with, as Roald Dahl would say, the great compositional movement of Bach thru Mozart to Beethoven; in painting the Renaissance or the advent of Impressionism towards the end of the 19th century; or literature’s sweep during Tolstoy / Balzac / Dickens. To paraphrase Infinite Jest author David Foster Wallace, the alternative is the default-setting, the constant gnawing sense of having had, & lost, something infinite.

So here’s a call-to-action: demand only the best & most meticulous & settle for nothing less. Be unafraid to pronounce the obvious – that much of what’s packaged & sold worldwide under the name of chocolate are dead Easter Bunnies.

Have no fear… inspired by the likes of that little child o’ Bethlehem, or the man who sat under the Bodhisattva tree, & the spirit who came on a winged-chariot, or the godparent reincarnated from cacáo in the sacred text of Mesoamericans – the Popol Vuh (‘Book of Community’) – we come peacefully to receive & perhaps even shed light on this dark, shadowy substance w’all call ‘chocolate’ in communion with everyone who takes it because, to borrow Emily Dickinson, friends (more than Chuao, Iara, Los Ancones, Gran Couva, or Nosy Bé) are our estate.

Should we fall short of our ideals, at least we’ll heed the bumper-sticker to ‘Save the Earth: It’s the Only Planet with Chocolate’ so that in the words of thinker John F. Walter “what we took from the Indians, we’ll give to the aliens”… which may end up our saving grace, & saving ourselves in the process, by either being the best kryptonite in the firmament &/or allowing us to befriend them.

Yes, ours is a heavy responsibility because what happens if brilliant scientists like Stephen Hawking or Neil deGrasse Tyson discover extraterrestrial intelligence of a much higher order &, to placate them, to satiate them, we have to come up with best we have on Earth? That may turn out to be chocolate; not any kind of chocolate, but of a certain type & quality. The JCS (Joint Chiefs of Staff of the United States Armed Forces) would then come to humble creatures like us for advice! Just as in 2008 NASA beamed the Beatles track “Across the Universe” into deep space in a wishful message of peace to any intelligent life along the path of the North Star (Polaris) which the song will reach in 2439…. unless its radio waves dissipate.

Just sci-fi? Long the stuff of literature & movies (Contact or E.T. among so many) & now the subject of science calculating the simple math: with over 100 BILLION galaxies, & at least 450 known planets orbiting distant stars, Earth is unlikely to be the only one out there where life evolves, including a few intelligent life forms that could pose a threat. We may be far from alone after all, & contact with such a species might devastate humanity.

Hawking warns about prowling aliens: “We only have to look at ourselves to see how intelligent life might develop into something we wouldn’t want to meet. I imagine they might exist in massive ships, having used up all the resources from their home planet. Such advanced aliens would perhaps become nomads, looking to conquer & colonize whatever planets they can reach. If aliens ever visit us, I think the outcome would be much as when Christopher Columbus first landed in America, which didn’t turn out very well for the Native Americans.”

Too close for comfort & quite germane given how the history of cacáo, Columbus, & chocolate intertwine.

No, this isn’t a cancer cure… it just might be more critical!!… provoking us to think galactically & act molecularly. Consider if we fail to cure the ills plaguing chocolate – a godsend universally loved & of relatively small economies of scale compared to the auto, housing, & financial sectors – what hope do we possibly have for whatever else ails us? 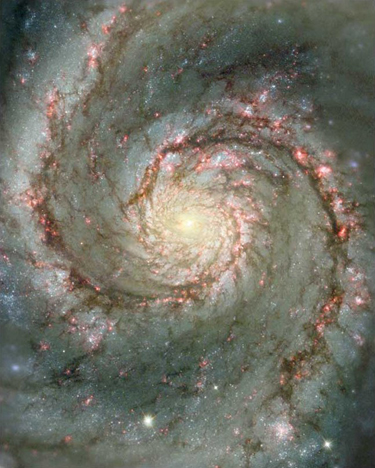