Word-Cloud dataset from front & back of 23 bar wrappers claiming to be Arriba cacáo; image generated via Wordle (http://www.wordle.net/); Cristian Melo @ 2010

Chocolate, like sex, sells. Better yet when sold together – the M.O. of Vosges. But really, no need to send in the Girl Scouts™ ringing bells door-to-door. Even See’s Candy™ stores are still open, founded by a granny with a dream on a continent of tooth fairies.

If reading is a form of telepathy, then the handle or ‘mouthfeel’ of chocolate can be tasted as its aromas can be sampled, just by staring at a screenshot.

For many it’s the richest pleasure out there, but it’s inside us too — its DNA inherited, its chemical compounds the reward for neurons just waiting to fire in its presence considering how we already have ‘chocolate on the brain’. Just the sight or scent triggers reactions. According to Oxford psychologists Edmund Rolls & Ciara McCabe, brain scans of a class of subjects shown pictures of chocolate reveal greater activity in the medial orbito-frontal cortex, pregenual cingulate cortex & ventral striatum – regions popularly known as ‘grey matter’.

So we tell ourselves stories to bring evermore of it to us. To hunt it down in exotic places where whole cultures & their languages are dying along with the original seeds of ‘the god tree’. We spin yarns on infinite-pleasure-in-a-bite while showing the enormous plantations where cacáo trees grow, worth more to humans than the tropical rainforests they replace.

In the process, figures are elevated — enigmatic tricksters & characters… be they critics, lonesome growers, self-taught journalists, dept store buyers, designer makers – to pose as a mystery so important it shakes our entire world view about happiness, pleasure, food, drugs, God.

The Cuban cigar, the perfectly hand-rolled Dutch blunt, the starry glass of French champagne, Persian caviar from the bottom of the sea… none of them mean much until we surface from the depths. And chocolate, of course; a mystery that challenges & asks why chocolate sticks its intertwining histories across the centuries… sacred, sexual, brutal, bloody, cruel & exciting… just as we expect it to satisfy our cravings – instantly.

The secret histories & stories. The ones we tell ourselves now of the Maya’s magical brew as if the tree Theobroma cacao anthropomorphed into Teddy Broman whom we follow around with our cell phone cams in his search for different key chocolate talismans to be scavenged, then crowd-sourced by the Google Mappers around the globe.networking, & finally Facebooked & Twittered.

Cristian Melo studies this side of chocolate; specifically, the language of chocolate. He spent his childhood in the tropics & makes repeat journeys back to them. His advice: 90% or so of the print on the front, & especially the backs, of chocolate packaging should be read as propaganda. Stock terms meant to sell buyers a fantasy of what suits their purpose, rather than what actually occurs, disseminated as ‘trade lore’ by a raft of middlemen, brokers, & dealers removed from the source… all bent on closing the sale with little interest in accuracy or integrity, knowing full well the obstacles blocking anyone who bothers to fact-check. Fodder from Winston Smith types, that tool of Orwell’s 1984 in the service of a totalitarian regime. Smith’s job inside the fictional ‘Ministry of Truth’ saw to the alteration of photographs & documents, remaking the past to fit the needs of the present. When the supply of info is massaged into distortion & paucity, it enables people on the receiving end to be happily deceived. 1984 came & went harmlessly enough. The age of the Internet goes one or two better by 1) adding ‘economical’ to whatever “might conceivably hold any political or ideological significance” in the Orwellian warp, while 2) distancing itself from time altogether in making simulation better than real (indeed, engineering realities that are unreal) because if you’re on the ground in the jungle, it’s the jungle, baby; & very few humans can hack that, seeing how few under this scheme know where they really are anyways.

Chocolate in truth unfolds in the opposite direction of a Shakespearean romance. It takes the grisliest of origins (horrific, terrifying, & poignant, all the adventurous dramatic elements) & tries to subject it to a sweet fate – Juliet, Ophelia or Desdemona in retro-metamorphosis. That proves hardly enough, for it then paints a descriptive tableaux filled with extra-linguistic associations ala Rousseau’s idyll of noble savages frolicking in unspoil’t nature & forest reveries, peaceful waters, & winds playing their own panpipe tunes.

The images & text on chocolate bars & boxes almost always stand radically divorced from reality. Concept branding / lifestyle marketing in chocolate plays on the divide between urban consumers & rural producers. All part & parcel to the distance & dislocation between the source & the sale.

Stereotyping the jungle, for instance, includes travel pamphlets that list itineraries for “touring cacao farms in the Rainforest, as pristine as mother-nature made it”. Farmers in them appear heroic, exotic, & handsome; fighting hand-in-hand with PR agents to protect & rescue the endangered / heirloom / rare cacáo varietals that go from the tropics to the bar you hold in your hands. Small surprise that often chocolate contains “hints of tropical fruits” to use several terms on the C-spot’s™ Banned Word List… maybe the beans were transported in a pickup truck carrying bananas, passion fruit, guavas, & who knows what.

Aside from the obvious (farms & the rainforest rarely mix; the Amazon for instance is mostly secondary growth forest, groomed that way by the children of “mother-nature”), cacáo plantations often extend the bitter legacy of slavery & drudgery. Smelly, humid, snake-ridden, mosquito-infested. If their micro-bites somehow fail to deliver dengue fever, then typhoid – a contaminated water-borne disease – probably will… right on the farm-hands &/or their family. Should they avoid getting sick – lack of immunity, after all, the #1 killer among Amerinds at the time of the European invasion – then the reward for all the toil comes when the commodity price of the harvest falls as production picks up.

(Sorry the shit just got real: The price one pays for pursuing any profession or calling is an intimate knowledge of its ugly side – James Baldwin.)

Because income from cacáo stays persistently low, a grower needs a 2nd job, which adds to the hours he or she must spend on the farm. How does a daily grind of, say, sunrise to sundown, no-benefits, no-overtime, sub-minimum wage, every-single-day-of-the-year sound? What about taking care of – insert favorite adjective here: unique, scarce, aromatic, fine – cacáo trees just to see that the yield amounts to a third of a plot planted with a full-sun “bulk” variety which, BTW, locally fetches the exact same price? Is it any wonder that growers just get fed up with “fine cacáo” & plant something else… anything that at least pays the taxes if not the bills? Is it any wonder that segments of local communities acquiesce with Big Oil & Mining companies to exploit indigenous lands? Or that they just lose hope with cacáo, chop it down or sell it off to some profitable cattle ranchers? It is any wonder that they dream about sending their kids to grammar school (forget college for the moment) so they WON’T have to be poor cacáoteros?

Upon enjoying that “fine chocolate”, please savor the subsidy that these farmhands gave you. They toll the 12+ hours a day in order that the fruits of their labor can be procured on the cheap. Pay no mind if you overpaid for that bar. Chances are the money stayed within the commodity chain to feed the wiseguys who actually profit most from this venture. (Thank you Wall Street for paying close attention to your computer screens all day long at the trading desk.)

And so, like any would-be professional in the service sector, growers want to flip the ‘k’ in one dirty 4-letter word (w-o-r-k) into a ‘d’ (w-o-r-d) because, hey, writing is easier than humping. (We recuse ourselves.)

Now here’s the killjoy shot: Oliver Stone or James Cameron could easily use a few industrialized cacáo fields as the backset for a war zone. Disease-ridden, dilapidated trees hunched-over infertile soil, contaminated waterways, & the sound of birds nowhere to be heard – a sure sign of lifelessness.

Cacáo, environmentally speaking, is generally good. In fact some peoples use it as an indicator of a land’s fertility & ecological standing. But a neighbor experiencing some economic woe, or perhaps a government invoking imminent domain decides to rent or sell a tract to whichever highest bidder comes along for mining, drilling, logging, clearing, etc., rights.

This despite scores of IMF-backed NGOs descending upon agri co-ops to certify them, so much so they’re labeled up to the max: Fair-Trade, organic, conservation alliances, 40 cents, Starbucked, UTZ, Fair-for-Life… the endorsements continue to pile on heavier than the suit of a NASCAR driver… just a small sampling of the 400 or so int’l organizations, plus more rushing to the scene, hopping to cash-in & sanction the “3rd World”. (Meanwhile, JFK Airport would pass for a bus station in some impoverished countries. Just one more reason John Jr. flew in & out of Teeterboro. Meanwhile Part II: some growers too busy tending to their plots remain unaware they even belong to a co-op!)

Certification creates a nice niche for a few brilliant bureaucrats in NY, London & Berlin who troll for opportunities, devising ‘norms, rules & standards’ in which other souls should actually do the work… even if these rules make nonsense-work when applied to the real world of the fields. A simple rule-of-thumb: how many NGOs does it take to harvest a cacáo seed? How many actually ever have?

Of course Big Candy never tells this sordid tale. That that sweet treat comes from tropical hell. Nor most boutique vendors. Ditto “fine-chocolate connoisseurs” who discourse over ‘notes’, heirlooms & rainforests (here’s to pleading the 5th, again). And perhaps the worst offenders / predators is the “raw-chocolate” tribe who tries to convince the unsuspecting public that everything raw arrives bacteria-free & sanitized from “organic”, “sustainable”, “Fair-Trade” oompa-loompas beating cocoa into jelly beans with clubs abandoned by cavemen. Anyone on the prowl for truly healthy raw cacáo should go to the tropics & suck the pulp surrounding the seeds of some fresh-cut pods.

In his Romantic Ethic & the Spirit of Modern Consumerism, sociologist Colin Campbell talks about fulfilling the itch of insatiable desires with “modern self-illusory hedonism”. Consumers are longing “dream artists” transforming themselves thru their now-innate “ability to create an illusion which is known to be false but felt to be true.”

So until the release of Cristian Melo’s ‘Truth Bar’, featuring hype-free deforested cacáo rife with chemical pesticides & picked by child-labor, just cop a feel from any candy bar or box of bonbons & devour the lump of sugar with a grain of salt, err… ahem, Dutched cocoa… secretly shipped to mouths everywhere from the private address of the Easter Bunny. 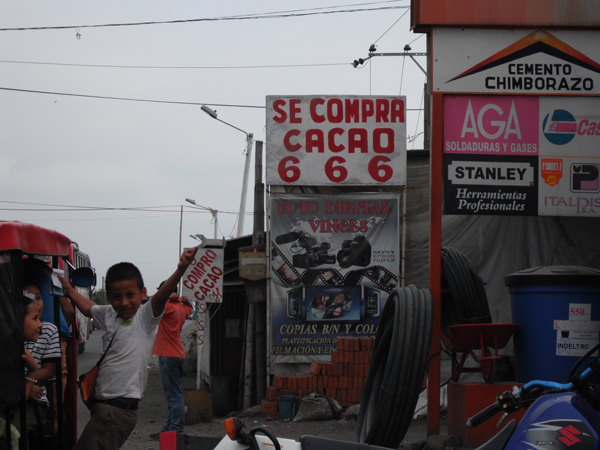 On the Guayaquil-Machala Highway… hmmm, yes, this latest “Arriba Cacáo” is a cute little devil flipping a heavenly tweety-bird of freshly pumped diesel & drill bits that nicely oxidize into metallic techni-colors soldered together thru stone-granite grinding