The chase is on.

Mars, the candy giant, has been frantically mapping the cacáo genome in conjunction with whole teams of scientists from USDA field stations in Miami, FL & Beltsville, MD.

Likewise their French counter – CIRAD — is equally fast at work, along with 2 int’l genebanks (CRU at the University of the West Indies in Trinidad & CATIE in Turrialba, Costa Rica). Plus scores of research centers, agencies & private foundations.

All of them racing to defuse a ticking time-bomb: Theobroma cacáo – the tree from which humanity derives chocolate, is under siege from a raft of dreaded diseases sporting colorful names better suited for a Halloween theme-park (Witches Broom, Black Pod, Vascular Streak Dieback) & some say, worse, political instability causing daily migraines & splitting headaches for Big Candy execs (peasant land revolts, infrastructure collapse, & Byzantine levels of corruption, not to mention the occasional coup from a military junta). Deadly co-conspirators fit for a Richard Preston novel (Hot Zone; The Wild Trees; etc.) that hazard to push cacáo into the ‘endangered species’ category. 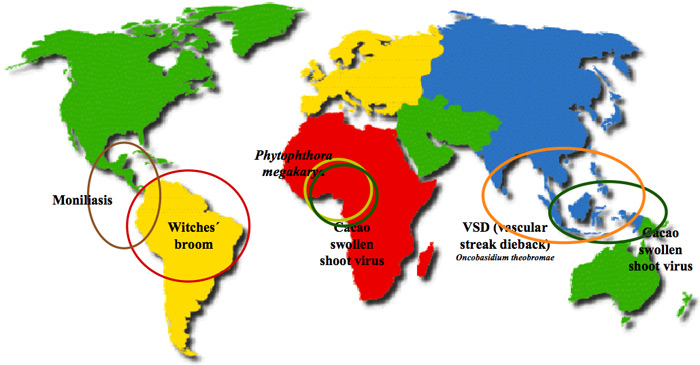 Indeed, the report of Dr. Juan Carlos Motamayor  – a principle investigator on the cacáo genome – ruins many a sleepless night for chocolate insiders.

For all its prowess, the chocolate industry lurches around the darkness in an anxiety-induced horror knowing that after some 70+ years of research, expeditions, & lab experiments, it possesses but one defensive weapon – SCA 6 – a cacáo strain discovered in Peru by FJ Pound way back in 1938, to combat its most feared enemy – that dreaded Witches Broom disease. Hospital settings instruct how bacteria eventually adapt to antibiotics to spawn newer more resistant super-strains. The clock for cacáo nears midnight. Soon, what happened to Henry Ford’s vision to transplant his assembly-line techniques on the rubber tree could very well be repeated with cacáo. 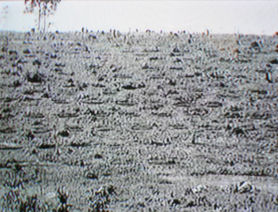 Monoculture trees were planted by engineers instead of botanists in the same way Ford placed machines right next to each other back home in his Michigan factory. Nature ultimately rebelled. Neatly lined-up in congested rows of 200 trees per acre as opposed to about 7 in the Amazon’s natural ecology, he made easy work for pests to wreak havoc. Nothing stopped them in the way of a brake from totaling one tree to the next. By 1945 it all went flat, & with it a large tract of the rainforest turned into a mud hole after the tiny caterpillar ate them all.

The same could happen to chocolate; for cacáo, especially of certain varieties, turns out to be a vanishing breed, according to Motamayor. In the last decade, geneticists & botanists have spotted rare types of it in the Amazon Rainforest never before seen. Upon further investigation, a 2nd trip to the forest laid bare, sadly, that the area had been chopped down, cleared away to make room for cattle ranching & soybean farming.

Consider the consequences of a world without chocolate.

GO TO PART I  –> Everybody, Headfirst into the Gene Pool: Sex, Drugs & Opera