The New Taste of Chocolate, by Maricel Presilla (2001) 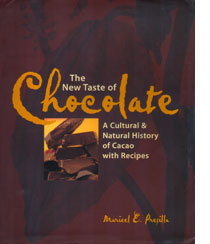 Dr. Maricel Presilla is largely responsible for putting premium chocolate on the map in the USA. Arguably our finest public educator, if there were only one book to have on the subject, this would probably be it. New Taste is to chocolate what Homer’s Odyssey is to literature or Beethoven’s 9th to music – practically impossible to get around, because it’s nearly all encompassing as the chocolate path often begins & ends right here. This Cucharamama & veritable madre de cacao has spoon fed many a novice until grown into full-fledged cognoscenti, most of whom still consider the book their bible. It’s that good. And with the updated revised addition, New Taste is now the new testament too.

Quality research – much of it firsthand – delivered at a high level of stylized prose & clear exposition applied with a light touch that occasionally ventures into poetics (e.g., in the rainforest the “vengeful sunlight… slivering into a thousand rays in the dusky understory – a hothouse without glass – … somehow atavistic, Jurassic… source of every chocolate bar & truffle ever made… the closest thing we mortals can get to ambrosia”) packaged in a continuously visual lay-out popping with eye-candy.

Make no mistake, however, The New Taste of Chocolate popularizes cacáo for the great botanical tree that it is – of historical magnitude & primordial significance – instead of just a marketable commodity; & its derivative – chocolate – as a complex specialty rather than a simple candy.

The storyline of Presilla’s own life embodies in some intuitive sense the culmination of cacáo in the contemporary world. Chocolate courses thru her blood; it’s in her DNA. Born in Cuba, raised on a cacáo plantation, a scholar of Medieval Europe, & culinary epicure by trade, she intimately understands at a deep-rooted level the psychic-exchange between Mexìcâ & Spanish cultures from the very contact point when Old & New Worlds met for the first time, an encounter that would eventually propel chocolate into a global phenomenon. Her knowledge, often acquired straight from the source, uniquely encompasses the 4 corners of the chocolate universe – growers, breeders, makers, & scholars – & far more practical / far less theoretical than so much scholarship emanating from academia today. She is, in short, a living link to the ancient royal ways, the reigning empress of cacáo, & her book’s effect & influence is lasting: it pervades in key if subtle ways throughout the field.

For instance, every so-called super-taster owes a debt of gratitude to Maricel since they’ve been banking off her notes & descriptors for years, without really having to open their own mouths to concentrate on what they’re experiencing other than to say ‘oh, if it’s Arriba… it must have ‘signature blackberry’ ringtones’. (We plead the 5th). Sometimes it feels she literally wrote the book on it. She got her hands dirty, digging deep in the dirt, trekking thru forests in search of Theobroma. Along the way, she gathered her thoughts into notes for this part-travelogue / part-technical field manual / part-natural history / part-cultural anthropology (is she really hanging with the Yanomamö in Washewe?) / part-tasting guide… & more parts than that (bean classification, plus recipes, some culled from Presilla’s own NJ restaurant – & we can now add ‘Presidential Chef’ to her titles… that’s right, she had a one-night stand in the White House… preparing a state dinner for 400 guests; hell, she’s more useful than a Swiss Army knife)… all of it valuable & even exhilarating in stretches. On top of that, she’s accessible, personable, & generous; equally vivacious & insightful; warm as the tropics cacáo comes from. Witty too.

The only cavil – New Taste focuses heavily on Venezuela at the expense of a broader survey covering other cacáo-growing regions, making her discussion of its genetic diffusion imprecise – at points inaccurate – particularly as it relates to areas beyond the northern coast of South America.

That aside, in writing this book she almost single-handedly developed no less than the modern language of chocolate for the English-speaking world – doubly remarkable considering that the mother tongue of this former ESL-student is Spanish(!), engendering both admiration & jealousy among Anglos.

One of the true stars in the chocolate galaxy.