Impact
‘Criminally Delicious’ because a) terms like that & ‘delectable’ are on the C-spot™ Banned Words List, & b) to think that 2 bohemian brothers are ripping this stuff in an apt kitchen, using equipment straight out of the cupboards, indicts about 75% of the known chocolate universe, most of whom are stroking their own egos wishing to be glimmering superstars making sludge half this good.
Appearance   4.1 / 5 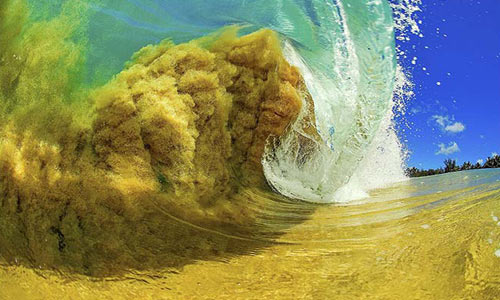 (photo by Clark Little)
Contrasting surf ‘n turf really gets the most out of 18 or 19% sugar, together with added cacáo-butter weight, aids in subduing the undying force of cacáo amplied thru sea-salt. The synergy & balance here demonstrate the Bros are culinary twins who thrive on broader canvases with more components, a reason why their Flavored bars often excel over their origin & straight chocolate blends. By bringing a different tack quite apart from classically-trained chefs or kitchen wizards on TV, the Bros obliterate the course. Yeah, there are plenty of Fleur de Sel bars on the market but none with the G-forces like this, at 81%... unafraid to step out onto the high-wire over the falls... walkers on a bold renegade edge framed in death by that unshielded roast within an eyelash of this bar’s life (even if it's a necessity, it's still a judicious move), mischieviously defying the elements. Zero F.U.D.

Some hard concentration going on here. And they’re just getting started.