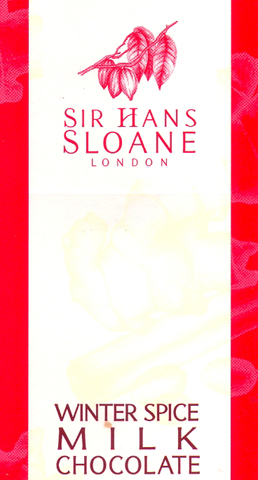 Impact
Sir Hans Sloane dressed as St. Nick in Clement Moore’s night before Christmas, when all thru the house... children nestled snug in their beds, visions of sugarplums tasting of chocolate munching thru their heads.

But due to hyper-security post 9-11, the police arrest Santa Claus for breaking & entering, plus charging him with pedophilia on top of it.

Aroma   7.8 / 10
ginger lacerates a chastened Milk Choc buttered-base & mulled spices
Mouthfeel   10.5 / 15
Flavor   43.9 / 50
ginger-laser cooled by cacáo & milk fats, the 2 tango against fleeting red berries gamboling over malted wafers -> cinnamon re-warms the senses into chocolate cardamom; mild molasses for an after-length
Quality   17.7 / 20
Haphazard on the face of it yet with SHS there’s always more than meets the eyes & taste-budes. In this case, contrastive elements (bright spices, earthen chocolate, probably muscovado sugar, tart red berries) & shuffled flavors synergizing to that cardamom back-lot (an inflection on a spice that does not in actuality exist in the mix).