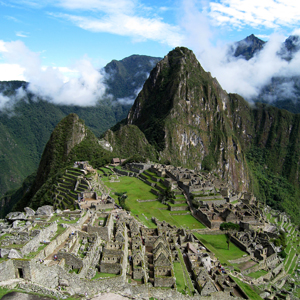 Yeah, Google Earth shows Machu from a 360 eye-cam view but the real Cosmovision Tour starts in Cusco, Peru - ancient capital of the Incas. The Solar Temple there. Also nearby, the last holdout against the Spaniards: Ft. Sacsahuamán.

1. Queue up & join all the daypacker gringos in a Fashion Show of Fleece (REI & North Face do a stand-in for Armani & Polo who just haven't conquered the summit of outdoor GORETEX yet) in the Plaza de Armas where you can buy ayuahasca shakes for the $60 express train trip to Aguas Calientes, then onto Machu Picchu... that’s if you don't want to hike the trail. (The local train costs about 12 soles, or only $4, but rich li’l trustafarians from Greenwhich, CT & Marin County, CA - whose parents came here once in the 60s in JFK's Peace Corps before they made the pile that now sits in their progeny's vaults - don't want to suffer the extra hour & a half in the company of altiplano Amerindians who might just be the real deal instead of faux alpaca vendors who speak Viracocha English.) TIP: That’s how the Peruvian children of the sun from the local ayllus (clan-based communities) practice a little reverse encomienda (a sort of indentured labor system) by having you haul all the looted treasure in the form of dinero ($$$$) back from Spain, Europe & North America, to atone for every Pizarro who ever lived here. They’ve built trams & bridges to make it easy to reach the Lost City of the Incas where the emperor had his astrological estate. Puh-lease. That´s sim Peru (as in simulated), likened to the ant colonies of Japanese flyin’ in from Vegas to ‘visit’ America’s Grand Canyon, snapping photos on the South Rim then hopping right back on the bus that takes them to the airport to return to the casinos before Happy Hour ends. True, that’s one part of the experience. Another is meeting up with worker bees in the lodge there for the summer who’ll slip the cordon at the top & leave the touristos behind, illegally hiking Rim-to-Phantom Ranch, down & up & out in a single day. As Heat-Moon writes in Blue Highways: get off the well-trod paths & get on the back roads, trails, & tracks. In other words, get lost.

2. Faithful diehards, who believe that the quick in-‘n-out is Jack-in-the-box for the hivebody of hordes & stoners whose tourism & pollution degrade this sacred hill, instead take the 3-day hike on the Inca Trail. It’s spectacular & better than any ayahuasca shortcut to enlightenment-bliss. Perhaps the most amazing trek of beauty still extant, past one incredible monument & hidden city after another. (En route, the Sacred Valley is a must. Especially Ollantaytambo. Ditto Pisac.) Getting up at 4 in the morning to see the fog clear from Machu Picchu & the mountain behind it at The Gate of Dawn is one of life’s sweetest memories.

Plan on a week (& end up staying longer).

Add-in an oven-roast that darkens this beyond its semisweet class, leaving a muddied-up / muddle-some bar.