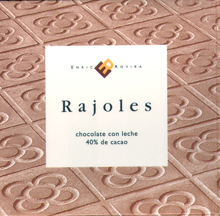 Impact
The trickster shows up in just about every culture from the Aztecs’ ol’ coyote Huehuecoyotl, or Anansi in Africa to Bugs Bunny USA.

This Leche cons of the drama queen in the film Safe who escapes civilization by living in a barren desert under a bio-hazmat suit were she to carry around all the allergens responsible for putting her there in the first place inside her lecherous breast pocket; the size of, say, this bar for instance, loaded with soy derivatives & plenty of dairy to ward off the lactose-intolerant, plus traces probably picked-up from machinery that also handles killer peanuts.

To simply call this a ‘Milk Chocolate’ would be ruthlessly naïve.
Appearance   4.7 / 5

Aroma   8.4 / 10
allergy alert: made in a factory that processes nuts & dairy... hefty & molten peanut caramel-fudge -> clarified butter alights to fix a sprig of white blossom (natal plum) -> substrate talc & putty, then ash stone
Mouthfeel   12.6 / 15
Flavor   43.1 / 50
gets right on it: dried caramel dissolves into melting cacáo butter for peanut toffee -> waxes out... until milk powders gradually shift progression to butterscotch -> vanilla milkshake -> skin of crème brulée -> talcum powder superimposed on a hit of cocoa at the base
Quality   16.9 / 20
Indulgent. A different take on the (milk) shake: vanilla crème brulée. Closer to ganche or a cupcake-glaze substitute than traditional Milk Chocolate. Steadfast & constant along a narrow continuum, extemporizing variations on a theme. Cocoa gilds the flavor (barely) but hardly a shred of the fruit-pops exploding in Rovira’s Dark bars. Whatever cocoa mass comprises 40% cacáo-content is negligible compared to massive browned-butter input (both exceedingly well roasted) that, in tandem with vanilla & milk, engineers all that confectionary power.