Indonesia is predominantly Muslim except for Bali which is overwhelmingly Hindu. One of its primary deities, Shiva the Transformer, often sits under the banyan tree, signifying bounty. It mythologically stands for Kalpavriksha, the divine wishing-tree fullfilling all desires, whose roots grow deep into the sacred Rigveda stanzas, starting with the Samudra manthan (churning of the milk ocean) when the God-King Himself, Indra, spirits off to paradise with it.

Just as the milk in this bar caresses & evermore softens the tannic force of an already-benevolent cacáo found in Amano’s Dark version of Jembrana, transforming it to the still-point of tranquility under a banyan tree, to be Shiva-like.

So good it feels illicit & whatever wishes you have will probably come true. Maybe even amrita... immortality. 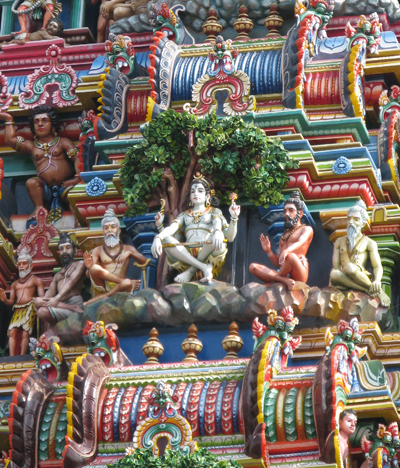 Lives up to the promise of its Dark-side brethren by pulling off the tour de horizon & actually delivering that essence of the Western image of Bali cultivated by anthrologists (RE: academic tourists): "an enchanted land of aesthetes at peace with themselves & nature". And while the Snap breaks a bit limp, the final taste hits the silent gong & wow-flutter bong... filled with Milk ‘n Honey. At less than $10, this bar is way too cheap for take-out flown-in direct from Bali.

Amano's technique is first-rate here. Seamless integration & hi-grade compatibility make it possible, check that, likely to lose track that it's a Milk Chocolate... dairy's axis on cacáo confers both light & lightness, the latter almost unprecedented for standard weight Milk Choc & even somewhat rare compared to Dark-Milks. Sumptuous conche adds to a beatifully warm roast that compliments a probable fire-dried bean. Cacáo butter then gorgeously fixes the flavor to near stasis & suspension, demonstrating once more why Milk Chocolate belongs in the fold; how it can show, when done well, a varietal’s best side, smoothing over some rough edges if need be, while still revealing cacáo’s inner core.

It has been said all sinners have a future & all saints a past. Amano has found its bean in Bali & in Milk Chocolate this bean has found its format.