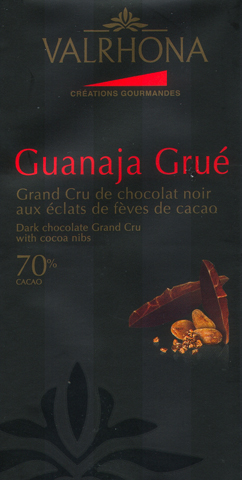 Impact
The Silver Anniversary of the bar that restarted it all. In the 25 years since the release of Guanaja, both the Wall & the World Trade Center have fallen. One Hussein has disappeared (in Iraq) while another & better has reappeared (in Barack). Meanwhile, Valrhona has kept with the mission.

If the original represented the chocolate equivalent of splitting the atom, this scatters the electrons like the so many Nibs that have been added, only to recall them in a recombinant fusion reactor. 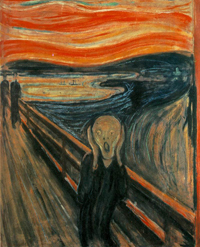 Rocks the mouth to Munch’s Scream -- those hallucinatory skies behind the pumped-up face in angst based on what he witnessed years before.

Voltaire said 'madness is to think of too many things in succession too fast, or of 1 thing too exclusively' (very apt to chocolate).

This does both in a maddening way. The difference between an A-bomb & the ‘N’ bomb. No, not the ‘N’ word, Funkadelics; nor End Times, Revivalists... but ‘N’ for Nucleated Nibs.

A perennial classic worthy of listening to Rubenstein's recording of Chopin Nocturnes on which exotic woods & pungent lacquer from his grand piano can virtually be ingested.

A bar that asks the tough questions &, equally important, answers them.
Appearance   4.7 / 5

Aroma   8.6 / 10
a wind-waker from dense forest of big timber: oak, mahogany, ceibo, slippery elm bark, cacáo, balata, palm coconut... pick any you want save for deadwood -> black currants & raisins bound up in leather strips, & coffee grains + a flick of ash in hommage to young Ceren (see the historical timeline around 590CE in The Concise History of Cacáo: The Nibs of the Matter; in this instance, pretty well roasted by Valrhona standards) -> eventually opens & stretches out an almond rolled in soft moss
Mouthfeel   13.7 / 15
Flavor   45.9 / 50
tracks Aroma closely: fires off pure Dark choc... thru & true, sugar cane & cacáo strain going 1-on-1, gram for gram -> coffee grinds it to a lacerating cocoa mix -> flushes in a black currant onrush -> tandems to chewy gooey raisins dominating the length... nearly stuck on the teeth... until nibs work their way around the goop, bringing almonds & hazelnuts along to free the Melt, the full effect slamming into the trees, a wall of wood (especially petitgrain & immortelle [orange blossom]) -> riberry & black cherry the casualties -> subsoil coffee pit + orange pekoe ‘n coriander w/ added tang from soncoya, granadilla, & satsuma... the longer this goes on the more important it becomes -> hits bottom wafers... to make coffee-cake + mud pie for ultimate chocolate sludge
Quality   18.5 / 20
Does not disappoint; primped up then pimped out & just crushes it.

A big bar that lives up to the legacy.

Those who hate Val’s stock black-fruited goo will despise this pure haterade even more seeing how the goop tastes scraped off the bottom of a coffee pot buried somewhere underground.

A chocolate Rube Goldberg device; exceedingly complicated but highly compatible (if somewhat narrow) blend of a dozen or so beans that performs a very simple task when it gets right down to it... but in an incredibly indirect & convoluted way: just the all-emcompassing power of cacáo.

Nibs bring it with mass, depth, & heat to the comparatively lighter bodied / diffuse Guanaja of the past, turning the already masculine & muscular into the Jurassic -– & well-proportioned. A seemingly multi-variegated roast calibrated by origin & seed type, pulled together & unified in a voluptuous conche with bite (due, again, to those exfoliating Nibs) proving once more that Valrhona can still kick some tongue in the best tradition of the grand old bitches.