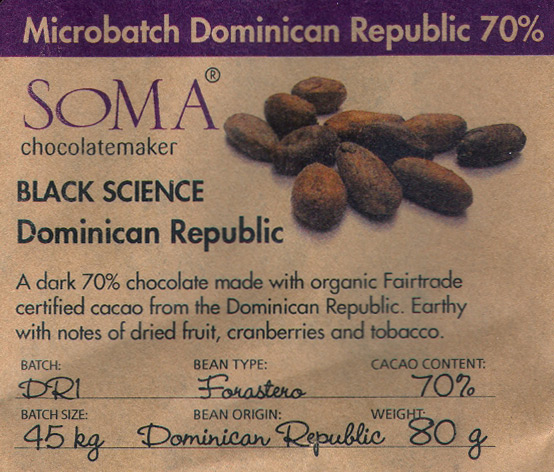 Impact
David Castellan of Soma could be chocolate's answer to Alan Lomax - a musicologist-turned-chocolate bar-smith with an ear for Beck’s Odelay (Spanish street talk meaning ‘right on’) & the White Prince’s protegé - Caged Elephant (ain’t no rest for the wicked / til we close our eyes for good).

This bar starts on the former, then ends in the latter, to recall how in the old days circus tents were waterproofed with paraffin & gasoline, a treatment that proved effective for rain but problematic for preventing fires (remember, people were allowed to smoke back then). The ringleader of one tried putting out the wildfire with his bare hands after spitting on it.

Consider that while ingesting this sweet tooth with a bitter heart that comes close to "So Near So Far" on Miles Davis' 7 Steps to Heaven album. Unless, of course, paradise is just a few teasing & melodiously lilting bars, quickly followed-on by some hard passages of electrical-splitters / fire-starting thunder in, say, the final movement to Mozart's Symphony No. 35 in D Major.
Appearance   4.3 / 5

Either a dual-staged or uneven roasting technique (an issue with the air-flow perhaps?) accounts for this split / transference.

Most will remember the illimitable bitter end, which obliterates much of what precedes it. Until then, however, this bar is on course, on the dime, a near perfect 10 as the gently-rocking conche rolls it into a dream lullaby, still coddling some of those poly-ester fruit acids found all over its prototype in Soma’s unrefined DR-1.

But with less sugar-load & fewer volatiles, the burnt aspects show thru too strongly... what could’ve been just a reminder of cacáo’s primordial origins is instead this bar’s lasting memory.