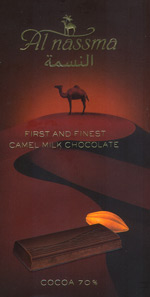 Impact
Dark side of cool – Cocoa 70 – in keeping with ‘al nassma’ (‘cool desert breeze’)... from the bleeding hot sands of Dubai.

What... chocolate with a melting point staked to the human body in Dubai? Where temps easily rise to 130º F?

Sure, if the Burj Hotel can refrigerate its beachfront for the feet of the rich, then what’s the hi-tech hump to getting over chocolate?

Aroma   8 / 10
no sign of the camel, bold signature Coté d’Ivoire, & no toning it down, just a darth-breather of library leather (book bindings + armchairs) & coconut shells polished in streaming vanilla musk -> okoumé wood resin mixed in some palm oil -> banana before it all goes to peanuts
Mouthfeel   12.1 / 15
Flavor   39.6 / 50
cocoa vanilla -> banana cream edge -> honey’d mulberry -> bahri dates -> momentary toffee turns candy corn instead -> mineral-back produces malt ball w/ metallic streaks -> camel bladder -> recovers on spice bread (cardamom) w/ nuts (pistachios); phosphorous after-glow
Quality   15.2 / 20
A grating freak-ball. Just a tincture of camel’s milk – 2% - may sound negligible but where other extreme Dark-Milks (60+% cacáo-content, such as Slitti’s 70%) from dairy cows exert an influence on the progression, this camel milk's variety directs much of the action & inheres with a lot of minerality to laminate the cocoa tannins in a kind of reverse-alkalizing, as well as that tiny & tinny sodium knock generating a toffee-tone, so by the end it’s the 70% cacáo-content that feels anemic. Moreover, gauging by the CBS Index (Cocoa mass / Butter / Sugar ratio) of roughly 1:2:1, it clinically is... smothered under a layer of fat.

Hardly the most pleasant taste, but dynamic nonetheless which early on has quite a positive effect over a mediocre chocolate seen in Austria’s Joseph Manner (the actual processor of this, & Chocolina’s Sheep’s Milk Chocolate – in other words, it knows milk; & all types of it... if only it would get to know cacáo) before the camel applies the chokehold here.