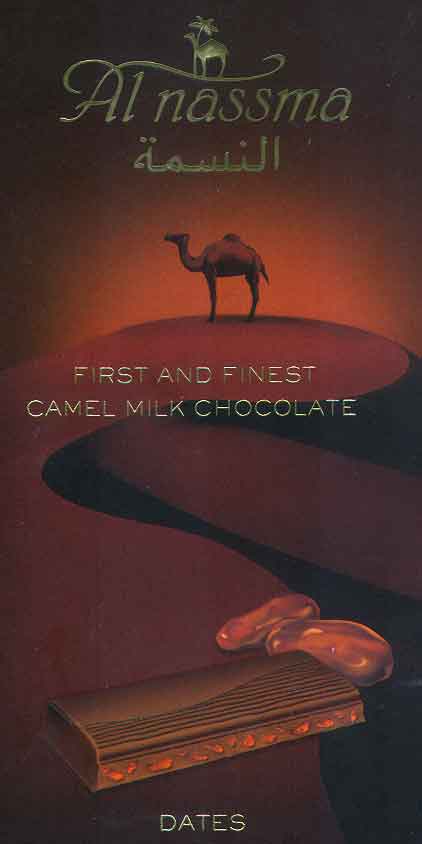 The date, the quintessential fruit of ancient groves in the desert oasis in the Middle East, meets the primordial one of the Amazon Rainforest in the Americas – cacáo. Globalism being how it is, who knows where these dates come from (probably California) while this cocoa was grown in the Ivory Coast. Brought together on the back of camel’s milk, creatures that evolved from the New World & are related to Peruvian llamas.

About as close as most Arabs & Americans get to each other in the post 9-11 world.

Aroma   8.6 / 10
simple MC w/ a twist: evenly ungulate between camelbert cheese & vanilla cold cream (think Pond’s™ scented w/ that ‘Dramaderriere’ fragrance found in Al nassma’s regular Milk Choc
Mouthfeel   11.7 / 15
Flavor   45.5 / 50
vanilla + dates team up for dried royal mulberries -> licorice -> umami salt accents vanilla into overdrive -> spice (cardamom & ginger) wafer (cream of wheat) drizzled on by apricot-inflected honey -> Roman chamomile -> bows out malted cocoa caramel
Quality   18.2 / 20
Excellent formulation in which the proportions come true. Inclusion of dates lays the kiss on to seal the deal that makes this a real ticklish, almost sqeamish she-camel. Dates go a long way in subduing much of the inherent salt content of camel’s milk & also, oddly enough, seemingly cut down on the apparent sweetness-factor despite being high in sugar - which serves to give an idea of just how much flavor they impart. Make no mistake though: this is still one hyper-sweet bar but textured & freighted rather than just cloying.

The most credentialed of Al nassma’s dossier.