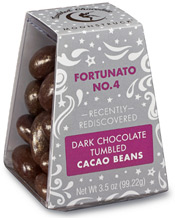 Impact
5:4 is the approximate ratio of purple seeds to white seeds in the pods coming from Marañón Canyon Cacao's genuine Nacional. Basically, a natural blend of sorts.

These little panned-chocolate nuggets take revelers back toward the finale of a long night inside Studio 54. What some thought were disco balls hanging from the ceiling, whose spangled stardust refracted off stage lights, turned out to be their own eyeballs rolling around the dance floor after falling out of their sockets & staring right back at them... dodging in between the boot heels (both male & female) to the thumpin’ rhythms.

Party heads then spent the rest of the wee hours scrambling furiously to pick ‘em up like lost contact lens (distant shades of Columbus’ first European encounter with cacáo when Chontal-Maya did likewise during a commotion that spilled beans all over the deck). If lucky, they’d grab a pair to pop back in, only to see they belonged to someone else (or better yet, a set from 2 different people causing severe cross-eyed astigmatism). The urban legend for the start of wild-freak multi-hued eye colors which ultimately became Marilyn Manson.

In the spirit of those times, these burnt beans similarly alter the outlook of taste-buds. Whoever made them probably comes from the same school that instructs people to cross a freeway with a blindfold on.
Appearance   5 / 5

Aroma   7.7 / 10
chocolate tang & corn starch
Mouthfeel   11.8 / 15
Flavor   26.2 / 50
cocoa-coffee bump up against each other then grind into some acid flashbacks mimicking a Sauterne-soaked fig that wash into a smoked-cocktail -> long trip down thru charred visions; hits bottom, no rehab onsite, just seeps into the groundwater -> wooden hangover w/ wet soot on it in self-realization of turning into caterpillar soup
Quality   7.6 / 20
Apparently Moonstruck ignores the technical details. By the time cacáo seeds have been fermented they become cocoa beans (& not the 'cacao beans' printed on this product's box).

Ditto their attention to roasting. Forget the volunteers, call the municipal fire dept to douse the flames. Torched & panned beyond all recognition (were these then deep-fried in a coffee grinder?). Difficult to disentangle any remains from the carnage, the flavor-flags just burned into a condensed mass too heavy to excavate.

A cocoa of some pedigree (demonstrated in its more natural state) that deserves better tact & treatment, including the use next time of a digital thermometer.

P.S. -- at least the chocolate coating is edible.

PSS -- subsequent production runs supposedly have improved, partially on account of feedback from this.