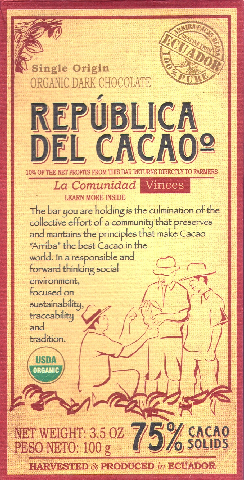 Impact
Fraudulent. The finest in redbathing chimbo. What’s that? Read on... to the Quality section toward the end of this review.

NOTE: República del Cacao was inivted to respond to the charges contained here. It declined.
Appearance   2.8 / 5

Aroma   6.5 / 10
cocoa-peanut toffee floating atop a naturally composted cesspool -> spices lend some tolerability if not altogether submersible (doubt anyone would wish to dunk their head under) -> bottoms out on green marshy slime -> spared only by a life-raft of cocoa butter
Mouthfeel   9.3 / 15
Flavor   29.9 / 50
picks up on the green theme... a thatched dwelling w/ a raw-like cocoa interior -> vines still attached to their branch hitting off a bitter chill, the odd igniter to roasted coffee spiced w/ vanilla & spinkenard -> with the house now on fire, descends from there into humus, then coconut shells, & finally fig strangler roots; grains out in the backyard (yucca, lentil, & rice)
Quality   10.6 / 20
Vinces in the western lowlands of Los Rios, Ecuador the epicenter of “old money” cacáo. These are the growers & the ancestors who put Arriba on the map in the first place.

The APOV (Organic Vinces Producers Association) still tends to the time-honored ways, husbanding old trees, a cross between Nacional x Venezolano (RE: no CCN-51; though clear identification appears inspecific insofar as it relates to Venezolano, described by Preuss in 1901 as a Carúpano variety which by now would rank at least an F3 for 3rd generation later), carted off to a central fermentary where they give it the traditional treatment: slow & easy.

RdC (República del Cacao) packages this bar with an insert, mostly PR for the gringo market, taking propaganda to a new hi-tech level. A Masters & Johnson-sounding manual, replete with “Reproductive Training”, “GPS Collective System”, “Sensory Evaluation Teams”... the sex ed surrogates of cacáo, furnishing updates on the “ancient inbreeding traditions” to the veteran pros of the APOV in need of Cocoa-Cialis... naturally tagged of course so the DNA can be traced back to their procreants.

Smacks of RdC giving the old-timers the business. Many of whom are probably the sons of the growers who discovered & crossed the refractario trees (selected for their disease-resistance) with the Nacionals in the 1920s to mitigate susceptibility to those diseases. The type of guys who kept interest in the original gene pool alive by continuing, & in small pockets still continue, to plant material descending from it. What Basil Bartley fondly referred to as ‘casual reproduction’. In other words, the good ol’ time religion.

The dynamic here should be the other way around: the seniors could show RdC how to do things.

One of the most experienced C-spotters™, a highly placed informant deep within Ecuador, files this report:

Funny. I just spent 6 months in Vinces & never heard about this from any of my growers (& I survey hundreds of them). Let me check with them to ask if this is maybe a new development.

OK, here it is: For brands that engage in environmental image cleaning (BP... Beyond Petroleum, anyone?) we use "greenwashing". For burnishing their social credentials (without doing the actual work) the equivalent is redbathing™. Very apt for chocolate because it harkens back to pre-Columbian associations of cacáo with heart & blood; & it signifies República's (or anyone else's) attempt to "get native", as in what so many Euros or Asians or ______ (fill in the blank) try to do with hip-hop by rapping hard as fools.

Finally, a transcript of the conversation:

C-spotter: RdC says they're collecting the good stuff, from the old trees.

Grower: Collecting nothing like that. And you know I've dealt with them [RdC] for 5 years now.

C-spotter: Plus they claim they're helping the growers, giving workshops & more.

Grower: That help is one of pure fiction. RdC is chimbo [expression of 'false'... as a $4 bill]. The ROK center is closed; I'm going to send a photo of that failure. Realize, please, that it's pure CCN-51 they buy & then concoct a backstory to draw publicity.

Whatever RdC is up to, they need to stop or someone in Ecuador should file a malpractice lawsuit. Just another nail in the “Arriba” coffin (there are so many of them because there are so many coffins; yes, when all the problems appear tough as nails, all the solutions DO resemble hammers).

For a country that pumps a lot of bad chocolate this stands-out for its bizarre ineptitude in reaching new creative lows. A bean of potentially solid core chocolate instead just randomizes. No lift whatsoever, excluding the ultimately swollen Texture. In hiding defects, the accomplices lubricated the sludge with globs of lecithin for that textured anomaly.

Partial fermentation? (That would reduce flavor but on the up side it also reduces the risk of theft by cutting down on a bean pile’s exposure... a rampant problem in Ecuador).

Cocoa liquor that spilled out of the conche? (No floorboards; just the Earth’s dirt.)

The saddest part – compared to its past Los Rios, this presents a regression of type. Perhaps the result of RdC scrambling to find re-supply since closing the center at Vinces around 2008? Or the APOV no longer supplying beans to RdC (Why? Becasue APOV demands fairer prices with less complications for its growers?... Oh, so let's blame APOV for putting RdC Vinces out of business!?!).

RdC: lose the posturing & just concentrate on getting serious about chocolate-making. 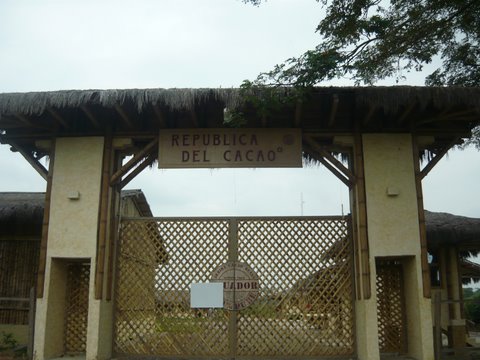