Impact
A bar that starts out straight, only to hang upside down, mimicking many cacáo pods or, better still, the pink-legged graveteiro (“twig-gatherer”; Acrobatornis fonsecai) who spends most of its time in the forest canopy, upside-down, foraging for insects. 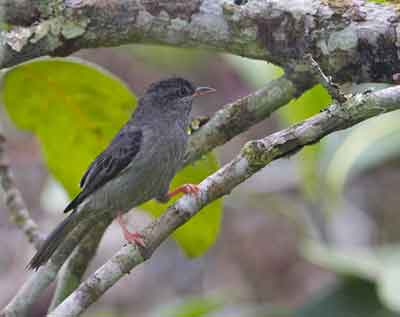 Aroma   8.8 / 10
a mighty sweat box of big leather ‘n dyewood -> silt from the river bottom -> alluvial soils producing black olive tapenade & salted catfish -> all pierced by tang of açai -> steams off black leather-backed coffee
Mouthfeel   13.1 / 15
Flavor   40.3 / 50
Amazon grape (Pourouma cecropiaefolia) dodging in & around dark mocha crawling w/ a bug or two -> wintergreen -> alights sweet acid / spry fruit (caza & gooseberry) -> cocoa butter melts thru lightening the load -> opening tannins recede in favor of açai + capuaçu w/ coffee backstop -> flushes out mild feijoa (especially its strawberry-like component)
Quality   15.7 / 20
A chocolate that grows on the palate & in the memory... more so in the aftermath than during. Imprecise coordinates on its location but presumably nowhere too far upriver for this diversity-loving organic-cacao to play by the shade trees, alongside S-B's Tomé-Açu, as both stand in a similar fruit packet.

Firm, almost cold, butter allows cocoa tannins to dominate the opening frames until meltdown, when it carries those fruits forward, inverting the profile with bright highs hanging low & wet on the tongue, nearly uncontained, save for a 30% sugaring which holds them at bay, as the core chocolate dissipates. Salt in the formulation hardly matters other than to work against the cocoa rather than draw it out.