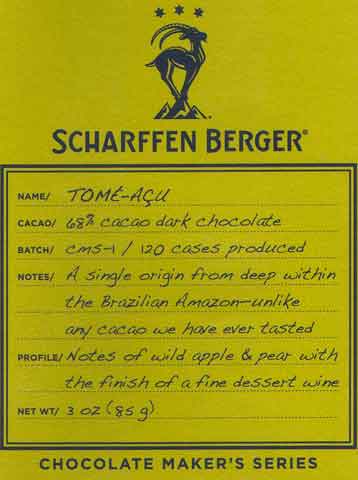 Impact
The Treaty of Tordesillas in 1494 was a papal decree of Pope Alexander VI that effectively split, in his drunken reverie, the New World into 2 huge tracts – the ultimate subdivision.

Spain got the better part of the 'demarcation' - some would argue a monopoly - inheriting almost everything of what was then known of the territory except Brazil, which went to less powerful Portugal.

That may seem like the short end of the stick but the branch of that stick must’ve come from the Theobroma cacao tree because Brazil contains the lion's share of the Amazon Rainforest – ancestral homeland to ‘el gran cacáo’ – & the motherlode storehouse to all of chocolate’s DNA.

This bar hails from Pará, Brazil & steals the punch bowl back to mix up some cocoa sangria-blanca zurra.
Appearance   4.1 / 5
first off the packaging: gone is S-B’s regular wrapper & inner-foil, replaced by a stark shipping box card-stock + wax paper
Aroma   8 / 10
bleeding red, bletted & fermented (caju) tapers to spiced-cocoa (cinnamon red-hots) -> sweet waxen-cocoa the underside w/ wild tobac
Mouthfeel   12.4 / 15
Flavor   43.8 / 50
unveils simultaneous contrast of cocoa-dust drifting around nebulous white fruits -> 2 white sweet-spots burst thru (starfruit & caza berry) -> cupuaçu tartens to mild passionfruit -> softens on guava & blonde raspberries -> chocolate, w/ tonka-mahogany supports, asserts itself against bracing acidity -> vanilla transmutes to black pepper at the back ->unexpected cashew & chestnuts leads to Roman chamomile + beautiful bosc pear dipped in chocolate
Quality   17.5 / 20
The back story of Pará cacáo finds the Jesuits in the 1600’s hiring indigenous Tupi inhabitants to go out & forage wild cacáo from the rainforest. According to Dr. Basil Bartley, who specialized on Brazil & at one time probably knew more about its cacáo diversity than anyone on the planet, Pará forms part of what he considers the ‘Amazon Extension’ outside of cacáo’s natural habitat because the region’s poor soil & nutrient conditions are generally unsuitable for the tree to thrive there.

The 1st commercial cultivation of it in the country was likely by the Jesuits along the Rio Mojú, which was in full operation by 1700, growing a type possibly sourced from their mission at the mouth of Rio Madeira. Not to be outdone, the Carmelite nuns later built a farm on Marajó island.

Cametá, located just north of the mouth of the Rio Tocantins, remains the regional cultivation center from where seeds for the crop in Tomé-Açu presumably derive. Some display rather unusual green-colored Pentagonum fruit shape, which in 1937 the explorer F.J. Pound related to fruits in nearby Belém (calling those there ‘half blanco’), a ‘central type’ generally identified as an Amelonado x Largarta (the latter of elongate / rough warty surface).

Bottom line: the Amazon Basin throughout Brazil in general, & even Pará in particular, possesses more cacáo variety than commonly assumed, most of it fallaciously lumped under a mob term by ‘Forastero’ fools. With so much variability recorded by Paul Le Cointe in 1934 & later confirmed by Bartley -- from shapes to colors & scent/taste of fruit pulp -- it’s hardly surprising that a chocolate from there would show flavors beyond monochromatic drone.

If Diego Badaró represents Exhibit ‘A’ for the area, then this bar is the B-roll.

Scharffen Berger’s Tomé-Açu goes against this American barsmith’s grain only to ultimately conform with it. Instead of S-B’s penchant for red-fruited profiles, this delivers a strong exposé on the white lights within cacáo. But the company’s signature handling (aggressive ferments / light-handed roast) leaves this rather imbalanced, then overbuttered to compensate in an attempt to reign in the ferment. The formulation could benefit from bumping up the cacáo-content, relying on slightly less sugar, increasing the heat (which will sacrifice some of the fruit package) in exchange for a surer foundational base of chocolate to create better symmetry.

As is, the high-register acidity comes off a mock Madagascar, endowed however with special moments including that chiaroscuro dark-light opening & a rare apparition of pear in the finish.