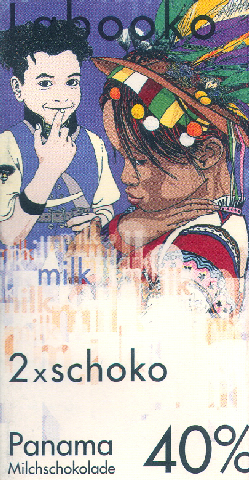 Lots of money flows thru the Panama canal. But of all the wealth, the indigene population gets it & feels it the least. So in solidarity they’ve discovered cacáo for themselves which requires a simple, caring hand & knowledge of the surrounding environment. Because it thrives among biodiversity, it helps protect traditional cultivation in the forests.

The milk in this bar comes from opposite heights: Tyrolean cows ambling like unicorns while grazing on mountainside meadows over in Europe.

Aroma   8 / 10
1st snort – plodding in vanilla-caramel; then the cows amble down into deep mocha toffee -> sniffs of straw & grass wrapped around their hooves -> tiramisu top
Mouthfeel   14.2 / 15
Flavor   46 / 50
bathes in pure cream caramel -> perspires salt & in a surprise reverse-motion bends butterscotch toward simple cocoa butter -> dilates oil-roasted almonds & cashews -> vanilla between their stop gaps -> slides over a skin of tiramisu -> trace mineral (calcium) at the back
Quality   18.1 / 20
Dubious choice to subjegate this already mild origin (Panama), especially in a lowly 40% Milk Choc format. Doubly so that cacáo butter outweighs cocoa mass in the fornulation. Add in a healthy dose of vanilla & stronger-than-usual dairy cows to cast ever more doubts.

A BIG Milk Chocolate – straight & honest yet bold & novel – that eclipses its ~40% sugar count. No wild note signatures. Just deep-taste cured in a hotter roasting temp to max this bean, complimented by an intense but short (15 or so hour) conche.

Simultaneously draws out the elements & melds them into a compound. Zotter then salts it away... literally (see ingredients).