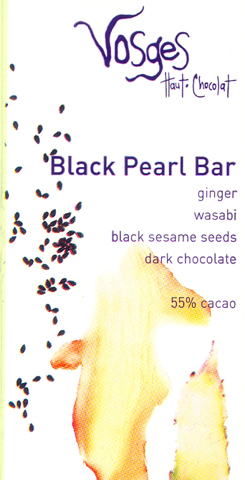 Impact
Criticism is a strange exercise in light of Booker T. Washington enunciating 2 ways of exerting strength: 1) pushing down; 2) pulling up. Figuring it out can be hard even for someone who had a Saul of Tarsus moment because one can never underestimate the strength of a person's interpretation of his or her epiphany over the epiphany itself.

So onward like good Christian soldiers to nonetheless affirm one’s position instead of hedging bets like a kitty by acting the great skeptic while the panties get so F-in' twisted up in a knot they're comin' out the mouth.

Charles McCabe: “Any clod can have the facts, but having opinions is an art”.

Instead as sucking-up in the vein of ass-kissers looking to 'go-along-to-get-along', here it is: BP Vosges in the spirit of JP Morgan.

Explanation: This latest crème de la trend from Vosges has about as much to do with Black Pearls as the Gulf spill does diamonds. At least crude & crystal share fossils in common. In truth, this spews closer to BP creating oil slicks.

Aroma   4.8 / 10
a cobra-breath of ginger-spanking asphalt -> wet horseradish cigar-leaf
Mouthfeel   10.4 / 15
Flavor   40.2 / 50
coffee plunge -> sesame w/ its iron on full throttle slams into seaweed on the way to sticking it to the ginger spritz (momentarily) -> wasabi (Japanese horseradish – here all radish / no horse... the Wasabi Lobby empty) just the root like sticky rice, the fragrance already evaporated -> peanut butter-wasabi soy sauce; peanut-butter ginger in the aft-shaft
Quality   14.6 / 20
The grrrls at Vosges, presumably well-acquainted & even frequent patrons of sushi bars, make a real feeler out of this compound.

The only thing missing – where’s the fish?

A junk shot to be sure but a fairly decent one in line with that NJ teen defecating in a classmate’s soda. Confects a balanced blend of flavorings, restrained yet able to withstand a stale, tweety-bird weak, cocoa base that the supplier (Callebaut?) must’ve been conducting aging experiments on before deciding to unload it as basement-bargain distressed inventory. Vosges in turn stepped on it several fold with that price-multiplier benefitting any self-respecting drug cartel.