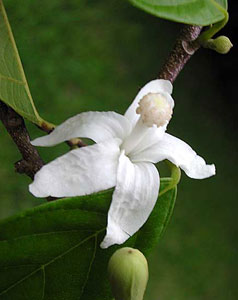 Rosita de cacáo (‘rose of cacáo’) aka madre cacáo (‘mother cacáo’) aka poyomatli aka cacahuaxochitl (‘flower of cacáo) -- lots of aliases only deepens the mystique. (Ditto that it’s botanically unrelated to Theobroma cacao.)

Add another: Quararibea funebris or ‘funeral tree’ because Europeans initially encountered it growing in Mexîcà / Aztec graveyards, no doubt escorting the dead with its healing properties to relieve anxiety-inducing fever, helping them relax on their cosmic-dream trip thru the spirit underworld, culminating in a rendezvous with Lord of Mictlan, their principle deity of death. The scent lingers in dry flowers... forever... freshening crypts still-fragrant after decades!

Naturally it’ll bury taste-buds under its pungent aromatics, its petals ground up here into an edible frankincense or myrrh likeness that attend Christian requiems.

During their lifetimes, souls poured it into chocolate drafts to produce a thick frothy head symbolic of orgasmic delight.

This then the root bar on which Madre Chocolate builds its foundation, drawing from the Mesoamerican tradition of ancestral worship that powers thru successive generations to answer whether Quararibea funebris has yet another act to play, a resurrection so to speak in that endless cycle of life-death-rebirth, & in the ongoing chocolate saga. Though horticulturalist Wilson Popenoe reported in 1919 that it was largely supplanted by cinnamon, even nowadays the Cuna people in Panama prepare an alcoholic drink of cacáo pulp & Quararibea; & around Oaxaca, Mexico the popular texatl or tejate often containing it is also thought to derive from pre-Hispanic times.

People, thoughts, inventions, movements, fads, et. al., have their moments in time, only to fade out or recede into the background. The greats can stage a comeback & experience a periodic resurgence / revalidation. The truly outstanding ones – Bach, décolletés, chocolate – never tire on the whims of vogue or ever leave the scene altogether, but always manage to hang in the air perennially... vital to creative life as hydrogen & oxygen.

Madre Chocolate... in an ode to Rosita... maybe even the distant-relative for Bruce’s raucous romp on desire which, true to his character, the Boss elongated into Rosalita. If you got a soft tongue, consider this the rambunctious rider. Let Rosie come out tonight & jump a little higher. On the way down, right before hitting rock bottom, post a ‘DNR’ sign (Do Not Resuscitate) over the flotsam... lest the dream-journey be interrupted.
Appearance   4.6 / 5
another hot mess from Madre
Aroma   7.1 / 10
comes on strong, ponderous, heavy-pounding: dried maple-musk puts the chokehold on some barely-breathing cocoa -> add liquidambar for extra measure of sweet-tooth death
Mouthfeel   6.8 / 15
Flavor   30.4 / 50
shovelfuls of maple sugar candies, long & strong... until cocoa in the guise of coffee ‘n cigarettes puff thru but just as rapidly blows out -> another shovel of caramel-glazed mapled-cacahuaxochitl... on & on & on &... skitters away to Mexican tarragon
Quality   12.6 / 20
Nothing cryptic about this crypt flower, just reckless. Rough as a the monumental stone-sculptors at pre-Columbian Xoxonochco – the Izapa. A crude exposition in order to grab, perhaps, the attention of chocolatarians & introduce nubes to cacahuaxochitl, hitherto untasted by probably 97+% of the population.

Where cacahuaxochitl’s lactone alkaloids may be chemical companions to cacáo's stimulants, each helping to amplify as well as smooth out the other, here they just annihilate the base. Does for cacahuaxochitl what Askinosie’s El Rustico did for vanilla: wipes out chocolate completely in favor of spotlighting the additives. Madre elects to ignore technique (coarsely sandpapering Texture for instance) & culinary considerations (overpowering an already shaky chocolate base, thanks to no roasting, by heaping dried flowers on it). More than ‘present’, more than pronounced; extremely potent. And cloying to boot.

Strong on the flowers; not for the faint-hearted. Nonetheless, Madre revives that great tradition by enlivening the cacáo orchards & the growers there in Xoconochco, Mexico thru assiduous bean selection & preparation of bars using heirloom recipes... astutely drawing on Mesoamerica's past to vault chocolate into the future. To top it all off, their craft flavor witnessed throughout its portfolio seals the deal & convinces everyone that re-imagining cacáo is for real.