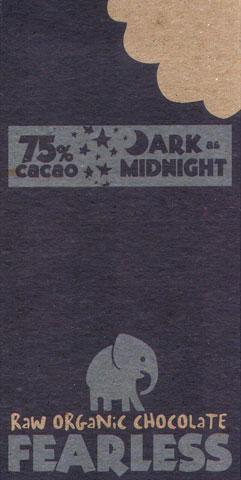 The street lamps are vandalized (or did they never work from the start?). No light at the end of the block.

Hang a hard left at the first corner. Where? ... right into a dark alley.

This closes from behind & brutally bars any escape.

Even though you find it distasteful, try convincing your Pal (for palate, that is) that fear is only a state-of-mind.

It then turns another corner... in the evolution of a young chocolate company.

All of which underscores a precept of the C-spot®: ratings, which this site compiles on a Daily basis & indexes in The Chocolate Census, are highly ephemeral to the point of almost meaningless.

They should be used simply as a navigational tool in how to approach a bar or a box, & never as fixed measure. Any who proclaim otherwise fools the public & maybe themselves in ignoring the folly, the fools bargain really, to an endless pursuit of the dog chasing its tail given that chocolate, derived from a botanical within the web of nature constantly evolves like all of life. It rivals Faustus for absurdity to think that that can possibly be captured.

No, ratings & awards all amount to simply a snapshot in time... of the moment / in the moment.

That said, the following review contains a composite of both the original & newer bars; the updated rating pertains to the latest release only.
Appearance   3.8 / 5

Aroma   7.7 / 10
that cheese-funk which once melted down on old library leather in the earlier iteration of this bar gets replaced by coconut shells
& those minor & unobjectionable raw cocoa elements (the vines, the twigs, the grasses, the spores, the molds, & the fungi among the mangrove) now show more straight woods
Mouthfeel   11.9 / 15
Flavor   37.2 / 50
no more of yesteryear's cold chocolate with a raw cocoa under-siding, the latter grows stronger as the length goes longer -> develops some helichrysum strangely familiar to Salgado’s Bahia -> faint fruits (grumichama a k a Brazilian cherry) bruised by a stinking camacho plant -> unbaked brownie flushes out the finish

all that gives way to a streamline chocolate-peanut combo -> licorice-molasses (the effect of unrefined sugar) -> stringent grip on the close
Quality   14.8 / 20
A fearlessly semi-"raw" rendition of Amma’s 75% bar, the actual maker, without the added cocoa butter which emboldens the profile ever further.

Decent medium-chocolate flavor dilates at the very beginning only to rapidly disintegrate, as most raw bars do, because their basic chemistry simply fails to support it, no matter how hard & warm (if not hot) the conche valiantly churns away to correct the inevitable decay.

A curbed ferment & curtailed processing contribute to that stringent grip for the finish.