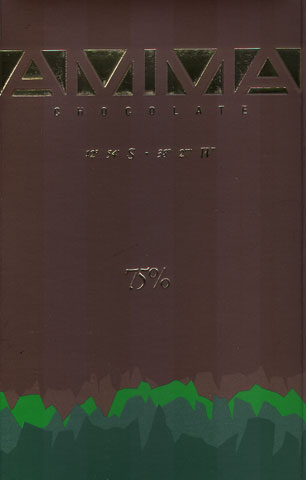 Impact
A 75% Brazilian that blows... well, a little heavier & paradoxically sweeter... like Sergio Mendes & Brazil 77 fronted by Amma’s Bahian neighbor Daniela Mercury on one of her many Trio eléctricos (sound-system floats) singing Só pra te Mostrar (Just to Show You) and Você Não Entende Nada (Nothing You Don’t Understand).
Appearance   3.7 / 5

That spice quotient resonates shades of Central American cacáo (Nacaragua / Panama). And his feral fruit signature virtually erased & principally replaced by baseline chocolate, the result of a truncated ferment &/or aggressive conching (the advantages to owning a cacáo estate), all further suppressed in copious butter.

Then again, maybe all his talk of subtle variations on Amelonado which he variously calls Parasinho, Puerto Seguro and Palmahita growing on the family's Fazenda Monte Alegre property accounts for the differentials in his bars' flavors.

Just one more reminder that chocolate end-flavor owes to a myriad of factors... some which remain un-quantified.

Neither a charred bit nor off-note to be found. Badaró showing he can practically do whatever he wants.