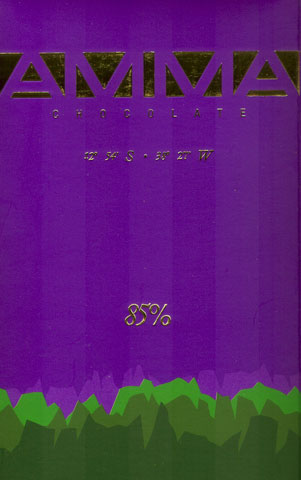 Impact
Diego Badaró hooks up with wingman Frederick Schilling (ex-Dagoba) for this flagship carrier of their new Amma label. From the looks of the wrapper to the taste of the tongue, together they rock ‘em out darker than Blues Brothers from another mother.
Appearance   4.4 / 5

Aroma   8.7 / 10
incredibly poised: wearable butter-leather in gorgeous Milk Choc cast -> icichiba wood veneer -> Snap opens up a palm nut, the tone-setter for beautiful nut-inflected cocoa-aromatherapy
Mouthfeel   12.1 / 15
Flavor   46.3 / 50
a punch bowl (slight emphasis on punch as in slugfest): drops right in on ripe plum’d cocoa & its Blues Bros pomegranate, of some considerable tannic thunder verging on aggressive -> supple leather -> next, a sour-sopping drench, contrasted in a hundred wood cuts straight from the ferment box -> tonka -> bare-knuckles chocolate -> plum briefly re-emerges, mixes with the "tropical fruit" tang (now includes pitanga, cambuca, capuaçu & passion fruit) -> neither crybaby nor sour grapes per se but jaboticaba madeira over palm nuts... reverberates for days with enough vibrancy to cause even the dead to shudder
Quality   18.8 / 20
Unlike some who jealousy guard their sources (Amano, Marañón to name just a couple), Amma openly discloses theirs with pinpoint accuracy (GPS coordinates 12º 54’ S 38º 27’ W refer to the processing center in Salvador, Brazil; the cacáo grove Fazenda Monte Alegre situates outside of town a ways). Of course owning the property helps immeasurably to counter any insecurity in the fierce battle over hi-flavor beans on the int’l market.

Very well studied; models its contour after the Pralus prototype from the 2008 vintage – the roasting curve controlling acidity & balancing bitterness expertly. 48-hour conche finishes the job with none of the fatigue witnessed in Åkesson’s release of the same cultivar, though the relatively short conching cycle sacrifices some Textural finesse.

Make no mistake however: the Flavor pre-cursors are already set & ingrained in a lengthy 7-day ferment. This non-complex cacáo -- a pedestrian Amelonado type -- just oozes with pulp that allows this bar, in effect, to play chess with checkers.

A Diego Badaró production... Every aspect from planting to processing & packaging shows he owns it in every sense of the word.

A standard reference for the modestly sweetened 80%+ class that towers over the field in Brazil... & elsewhere.