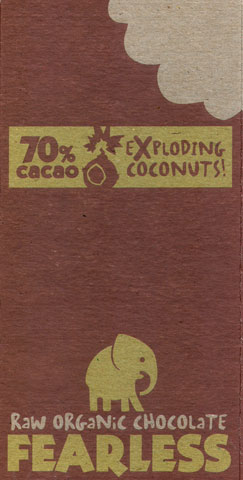 Impact
Revolting raw choc & exploding coconuts... the probable drunkey-business behind some simian military junta... except they’re among the smartest apes in the jungle.

A sort of vegan version of a Dark-Milk Choc, swapping out dairy of course for that coconut (the so-called 'mylk' trend point). That does more than just mask an underdeveloped chocolate base. Coconut modulates this bar to achieve what its the 75% brethren, in an earlier more "raw" incarnation, failed at miserably: sustain that core cocoa flavor while simultaneously enhancing the lone fruit note catalyzed by sugar.

Well-conceived by Fearless & brilliantly executed by Amma on its behalf. One well worth the endeavor.