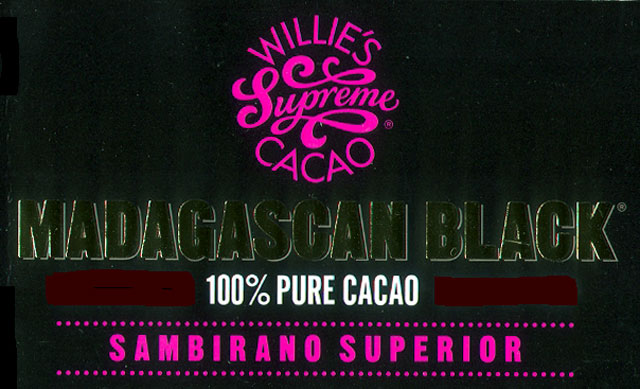 Impact
Other than Shakespeare, no one is more cited in English (or perhaps any language) than the imminently quotable Winston Churchill. There are 2 things more difficult than making an after-dinner speech, the British prime minister once said, "climbing a wall which is leaning toward you & kissing a girl who is leaning away from you".

Madagascar cacáo stands up as the tall tart in the chocolate room. Almost everybody loves her – especially other women.

This unsweetened tart hits heavier than a brick wall falling on your Pal (for palate, that is) after getting up the nerve to French kiss it.

Wonder what Winston would say about women who, to use Spike Lee’s $3 million motto for MSNBC, ‘lean forward’? Something no doubt about an iron-curtain of the tongue descending on the lips of progressives engaged in a cold war relationship.

Aroma   9.1 / 10
edible furniture: bleeding reds (cranberry, raspberry, barberry) stuck on some cedar with vanilla glued on for varnish (emphasis: glue) -> lovely hibiscus & nuts on the wood cut inside the Snap (once the chainsaw bores thru); overall light as wicker & eventually blows out cotton seed
Mouthfeel   12 / 15
Flavor   41.2 / 50
shocking chocolate (for Mad’s customarily known for low CQ or Chocolate Quotient) -> pine nuts -> prickly pineapple skins -> vinegar -> those reds on the Aroma mostly roasted out for schisandra & barberry -> bitter iron & quartz -> heads for the hills & scrapes up more oxides + minerals in its path -> pecan at the back -> resolves at the top on chocolate
Quality   15.1 / 20
Probably no origin has as many unsweetened chocolates or Nibs on the market as Madagascar. It remains the apple... err, pod... of the eye for barsmiths worldwide. Its rosy citrus bowl of compounds attracts them, as it does young females who continue to be chocolate’s core customer.

This takes a middle course. Neither the blistering acid bath of Domori’s Sambirano 100 nor the blissfulness of Pralus’ Le 100. It tacks on the roasted edge (creating that chocolate essence & generally darker tone like Chocovic while leaving some bitter phenols intact), then conches just enough of the acetic acid out (poor fermentation) to call-off sounding the alarm (sort of Soma-like), placing it foursquare in the ring.

A Madagascar for anyone who wishes to test their own level of madness.