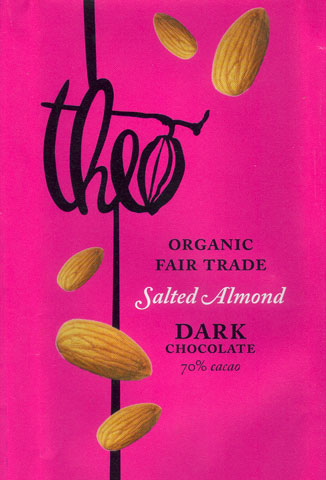 Aroma   7.1 / 10
dry ferment: a repeat of Theo's Ultimate Dark except almond of course swaps out the peanut tones (as well as, strangely enough, some Chinese sesame take-out) & cherry stems replace the woods -> gust of beer hops -> keeps giving with some grain crackers
Mouthfeel   13.3 / 15
Flavor   44.8 / 50
sapid almonds / insipid chocolate -> sodium mineralizes a white mushroom truffle (fab moment) -> expresses a citrus finish -> almond redux into an acidulated-chocolate confluence for the aft-length
Quality   16.6 / 20
Salted almonds steal the show. Especially their fantastic quartz-level clarity to the salt. Sea salt to be specific, & enough to give renewed hope that the oceans have yet to be totally trashed. (Or is that the savory effect of discarded plastic bobbing & floating on the waves prior to evaporation?).

Whatever the cause, it brings out the highlights of Theo's rather dim Ultimate Dark, the base blend of this, further confected by about 10% increased sugar which plays more on Flavor than sweetness so that it's less a 'sweet 'n sour' combo with this bar's acidic highs than it is 'savor 'n sour'.

The total package hits a contrastive peak at the very close: Earthen nuts + salt against bright-breaking chocolate, one of those rarefied confluences to rekindle memories of Mast Bros' Dark-Coffee bar that similarly sets out for destruction, then salvages a miraculous stem-winding finale.

Chocolate in this bar clearly secondary, though quite satisfied in its role to escort the mix-ins, which it fulfills admirably by the end after a meek start.