Impact
What smells of Albrecht Dürer woodcuts, then 'germanates' Klimt's Fruit Trees (stunning), ends up twisting into a funny Heinz Anger at the still-point of transport when he hears Dorothy Parker somewhere -- who never tires however many decades after her death -- saying something in his head about 'I like to have a shot of choco-rum please / 2 at the very most / After 3 I’m under the table / After 4 I’m under the host'.

No doubt Josef Zotter would show deference by pouring another of this bar's liquor into that mold. 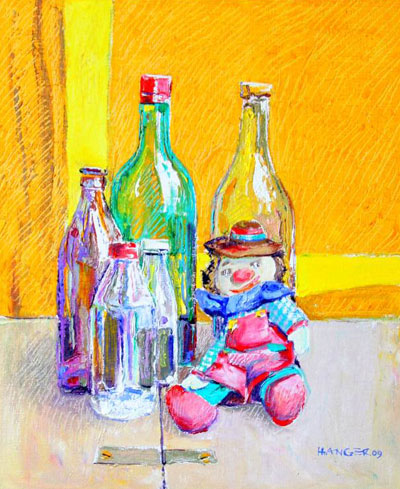 Aroma   7.9 / 10
distant & impersonal: cocoa powder + wood -> faint spice & golden berry -> before even realizing, it gets close & intimate, blowing smoke rings filled with trace mint & orange vapors -> airs out & bites with a barking chocolate (big wood + cocoa)
Mouthfeel   11.6 / 15
Flavor   48.8 / 50
rings right up on fruit: a) fresh apricot & papaya; b) black currant & pomegranate whose joint acidities conspire for c) plum-rum... holds it masterfully... over rippling chocolate -> distills dried apricot -> banana to soft-butter ending atop thin cocoa-wood laminate
Quality   19.4 / 20
So many phenomenal bars source their cacáo from the Dominican Republic that the island has now amassed a trophy-case of them. Add one more, & one of the best yet which places this at or near the top of the collection.

Zotter marvels at what he witnesses in the D.R.: neatly cultivated cacáo gardens free of tree diseases leaving the cocoa bromans (tree-tenders) to devote more time to R&D.

Probably no source crosses more cacáo types than here. So much so that it breeds new varieties to custom fit the terrain & the climate. Naturally, the plants flourish to create a succulent fermentation.

And the Z-man, Josef Zotter, lauds the ferment. As well we should too. It fraternizes these seeds then he romances the beans with meticulous sorting (very picky) into a blue-chip chocolate.

Zotter contracted with a central processor on the ground in D.R. that interfaces between the theobromans & the barsmith -- Roig Agro-Cacao -- & consulted on the parameters for roasting & conching to suit this cocoa's character.

Zotter & Roig absolutely nail it in crushing it.

All of which demonstrate Herr Zotter taking a more personal or at least a more direct hand compared to the his arm's length transaction with PNG. And the results show just as the flavor proves.

When he declares this "a very special chocolate flavor", Zotter makes no marketing hype. No funny business here; just reverential in respect & care for the cacáo.

Sound CQ (Chocolate Quotient) but in service of the volatiles so it feels secondary, as chocolate-infused fruits rather than the other way around. Bolivian-like in its dark fruits except for Caribbean rum in & on them. Salt magnificently contains those volatiles from expressing too much exuberance so that the poise between the fruited centerpiece flanked by chocolate & a rum-like FXs verges on gymnastic.

It demystifies why Zotter, a maker of several prior Dominican bars, never released a pure Dark from there... until now: perfection takes time -- that essential ingredient in bringing all the elements together (Texture excluded; that'll require just a little more patience... & if the other ancillaries such as Appearance & Aroma were to match the Flavor, this would ascend to ultra-pinnacle status).

A chocolate that re-validates both Zotter's & the D.R.'s world-class reputations.