Impact
WTFudge, Trader Joe's? Because even some of the tens of thousands of real & soi-disant coinnoisseurs attracted to a more-than-enticing subscription site need to slum once in a while.

Thanks to an organizer of a local farmer's market who boldly declares this "the best chocolate in the world" while slipping the bar into the pocket of a venerable C-spotter™ who in turn feels obligated. Everybody is entitled to their opinion. Must that extend to confusing ignorance with... oh, forget it. Just consider this an object lesson in 21st Century chocolate marketing.

Chocolate & caramel should be 'nuff said, no?

But some no doubt look at the packaging & are immediately transported to an idyllic maritime reverie where, thinking they can be the next Hemingway, will want to patch-write novels about it by lifting the copy on the back***. Something along the lines of hyper-txtg a revised version of Old Man & The Sea retitled Young Mermaid in the Lagoon for the Disney Channel.

Then the name of the bar further draws them down into the fathomless bottoms in a bout of dyslexia scrambling the letters of 'Caramel with Black Sea Salt' into Carmel by the Sea, California.

The stuff the big box chains -- Trader Joe's, Target, Walmarts, et al -- hire by contracting with some well-paid "cocoa PR consultant" to cough up trendy spittle because the masses want it. The same ones who then turn around & complain at every election cycle that the middle of the country is stocked up with a bunch of know-nothing rubes.

Besides, paying slick ad people helps the economy. It takes money from the Top 1% & trickles it down to the Top 3%.

Seriously, chocolate has been a staple for about 3,000 years now. Chocolate & caramel: for over a century. So said consultant also specializes in "bread trends". And until right now has not heard of pairing whale blubber with raw horse meat for a new surf 'n turf combo. "That sounds grand. I've a 12-star celebrity chef for a client... or is he 12 Step??... oh, dear no, that's me... anyways, he'll love that."

Meanwhile, would-be novelists "discover" much to their chagrin that this ain't no dream bar but a Robinson Crusoe shipwreck brought on by someone hallucinating Ahab's tracking of Moby Dick. 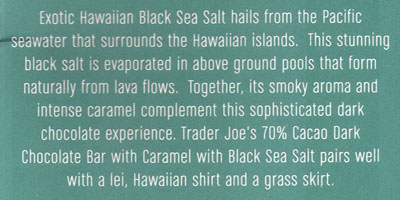 Aroma   4.8 / 10
cacáo supposedly hails from the tropics... this pipes in from the sand pits & tar flats of Canada oozing a maple butterscotch geyser + old-mold cocoa
Mouthfeel   6.2 / 15
Flavor   21.7 / 50
butterscotch hooked up to a high saline solution IV drip & stuck on it, the platelets congealing around sticky glucose -> poisons already-sickened Dutched cocoa with metallic slag filings -> "smoky", yes, as in charcoal embers at the back
Quality   5.4 / 20
An insult to the category; even as a confection it falls short of stale Hallowe'en candy.

Instead, let's go to the elements. Here's the shorthand on Hawaiian Black Sea Salt:

round crystal structure as opposed to the elongated flakes of other types;
considered a strong salt due to ocean electrolytes & trace minerals;
activated charcoal gives it black color.

Early Hawaiians hold their salt to be sacred & is usually gifted rather than sold which makes it somewhat of a chore to get any of it off the island for commercial re-sale. In keeping with the nautical theme of this bar, Trader Joe's must've pirated a shipment.

But the consultant who then advised the company on this bar should take a page out of Plato's Apology, the one where Socrates takes the hemlock.