Do Not Eat This Chocolate 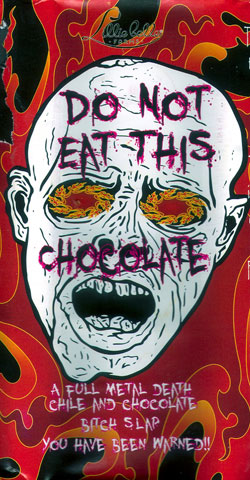 Impact
A bar to stop traffic dead in its tracks on Manhattan's Upper East Side -- home to America's oppressed 1%.

The situation: Leadfoot, hopped-up on meth, hangs a "Pittsburgh right" from the left lane going 72 in 30MPH zone & clips a stroller pushed by SuperMommy with SuperBaby in tow (mother 'n child feeling super-entitled as members of The SuperClass despite the red light).

Seeing this, Psychlo, sporting massive thighs on a single-speed bike, runs the red light too & shreds directly into their intersection.

This attracts the attention of Sgt. Rankle from NYPD.

He reaches into his canister of pepper spray, pulls this bar out & throws it into the melee as part of the department's Courtesy, Professionalism, Respect campaign for better community relations.

All are immediately overcome with severe heat seizures; spitting & vomiting the contents on the street, except Psychlo who eschewed a piece of this latest crowd-control technique.

So Rankle apprehends him for violating the "Don't Block the Box" ordinance. As the Sgt. takes out his wad to write-up a ticket, Psychlo snickers at him.

Taking note of it, the Sgt comments, "So, you think this is funny, do ya?"

"Well, think about it, officer. You've got a squad car, a dispatch radio, plus a gun in your holster, & here you are writing a summons for a bicycle. Crime must really be way down in NYC."

"Orders from up top," the Sgt. clears his throat. "Mayor Mike is cracking down. There was a cyclist around here a couple days ago that ended up under a bus."

Psychlo ain't letting him off. "So what's next, moving violations for mothers rolling strollers too fast thru the crosswalk?"

That sends a small-crease of a smile across the policeman's face. He offers "Here, have some", referring to this DO NOT EAT THIS CHOCOLATE bar.

"No, thanks, just heeding the warning label on the wrapper".

Meanwhile, hurling continues in the intersection & upset motorists are honking their horns. In the ensuing cacaphony, Buppa, a well-groomed brotha in the neo-'hood, is out walking his Yorkshire Terrier. It licks up & relishes the street vomit. Instantly the pet lays a pile of dog-done-it to her owner's praise “Good going, Dolly, that’s a big fucking crap”.

A snap reaction no doubt to a bar suffering from severe anger mismanagement in a NY Minute.

YMMV but for anyone afflicted with I.B.S. (an apt acronym from a clueless medical profession), this will roil that into BSD (Burning Sphincter Disorder). Duly forewarned.: 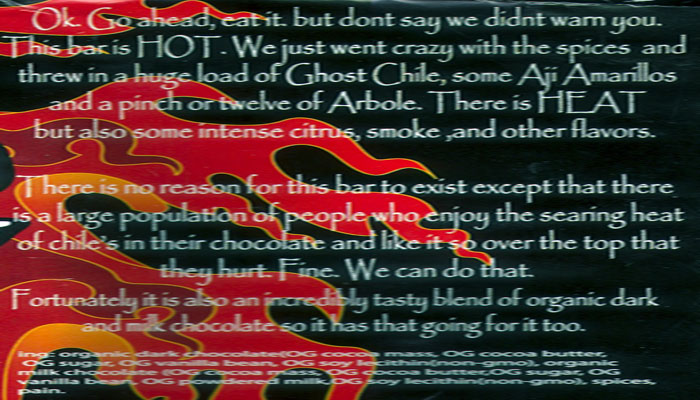 Ain't about that. It's all on the Scoville Heat Index: cow's milk kicks the canister over & pepper comes spraying out around a soft floral splay (a sick tease), then Cinnamon Red Hots™ gets its fang in there (so far no problemo; güero can handle this) -> before long (when sitting on an open fire pit, a second lasts forever) the acids, likened to grapefruit extract, start dripping out the tear ducts -> flames engulf some red fruit mirage with a now-burning sweet-spot & terminal bombardment sets in for good...

After the stinging lips are flayed off & the numb-tongue connected to the skeletal-remains-of-a-skull wilts then decomposes, candied whatchamacallit sumthin or other thingamajig persists for the rest of its, like, 1,432 hour half-life
Quality   15.4 / 20
Forget swallowing, don't even inhale.

At first bite a bit of a hoax, kinda in the same vein as the counterintuitive marketing of yippie Jerry Rubin's Steal This Book. Quite tolerable really; but soon chicas will be wetting between their wax lines & sweating their pores out, swearing that both he & Jeff Shepherd of Lillie Belle Chocolate aren't kidding & are F-in' deadly serious.

At that point, the scare-cum-dare turns on a power pepper-pig... an energy & then vapor-sucking sump where chocolate just becomes the lure for self-immolation.

Honestly, the cruel Lillie Belle mercifully tucks these peppers in a Milk Chocolate (albeit a Dark-Milk) which balms, if only somewhat, the heat; for fat, rather than any liquid, is the sole ingredient on Earth to arrest searing fire.

Take her advice anyways: shave this on ice-cream for fire 'n ice as opposed to ingesting straight / no-chaser.

Too afraid, honestly, to describe this as "heavy-handed" for fear that Lillie Belle will next release a charm-bar named Eat This Chocolate Everyday that ups the temperature ever hotter in sweet revenge.

The name of this bar & its warning label pretty much say it all except one thing goes missing on the wrapper: MADE IN HELL.