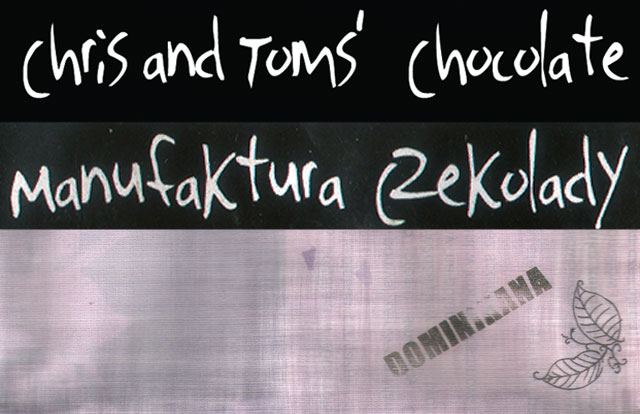 Aroma   8.6 / 10
a smoke-out: picholine olive over cigar leaf & hickory chips (+ a bit of petrol too) & a medium chocolate note; generally frutiless
Mouthfeel   11.2 / 15
Flavor   45.5 / 50
sweet-spot sapote right off the block -> brown sugar -> tamarind & fig -> mango with a parched wooded cocoa counter -> dried apricot
Quality   17.1 / 20
Betrayed by rank beans in its Ekwador cru, Chris & Tom find themselves in far better company here with cacáo from The Dominican Republic, an island which for several harvests now rates near or at the world's top in production quality. In return, the label responds in kind.

While nothing's out of place with flavor, indeed the bar holds true to the D.R. (relatively short & semi-shallow), the Texture is anything but.

It literally ingrains the role that conching plays in the sensory experience: relatively curtailed (30 hours) yet vigorous (hi-friction) to smooth out the volatiles while contributing a coarse mouthfeel. Quite the tradeoff, generating a contrast between Flavor & Texture at odds with one another yet works amiably well together.

Overall a bit quirky... in line with Poland's national trait.