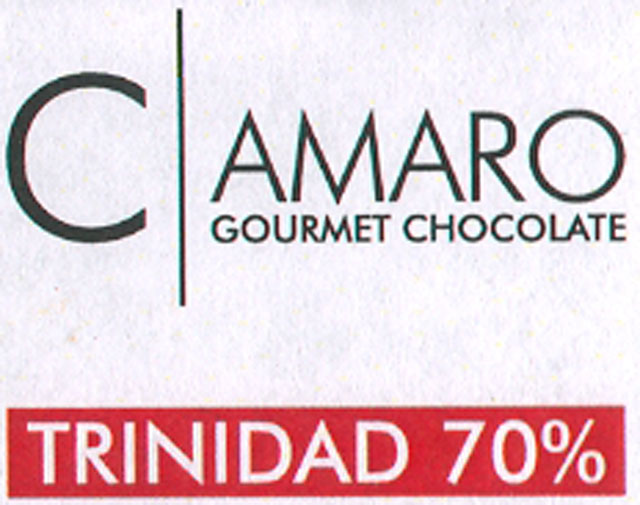 Impact
Shoots for an over & around the sun shot & comes close.

A little too close... to the heat rays.

Like Icarus, this bar melts its colorful wings off into coffee dregs.

2013: essential herb & earth (bay leaf in potted soil) over a grilled ferment
Mouthfeel   11.9 / 15
Flavor   42.4 / 50
2011: candied fruit-medley mash (the classic "tropical fruits" + pommerac & chironja) splaying in all directions -> chocolate -> almonds -> café -> breaks down into hay, tonka bean & jute + chalk, all to produce a passing hazelnut -> back to the dregs (coffee)... the more the butter melts, a surprising papaya spear with allspice (super nice) to subdue the café in a grain pile including chicory & carob -> charred cocoa around the edges

1) 2011: C-AMARO opts for a house-style to rival Pralus to see who one can out-fire the other.

Once again, high roasting, this time let off the hook by a cacáo mix with enough sweet spots to pull it back from the edge of total darkness.

Still a lot of tags go misplaced -- the fruit could be much more central; & the coffee grinds more convertible into core cocoa if under optimal processing.

By the end, this bar confuses itself about what it ultimately wants to become.

2) 2013: In C-AMARO's latest approach with a lighter roast, this flirts right on the raw edge without tipping over nor sacrificing too much Flavor by leaving under-devoloped compounds behind. Just sufficient enough to round off the profile while ensuring that this bar gets its antioxidants on.

As such, C-AMARO strikes a happy median. Warm yet cool, those mulling spices heat up the colder points.