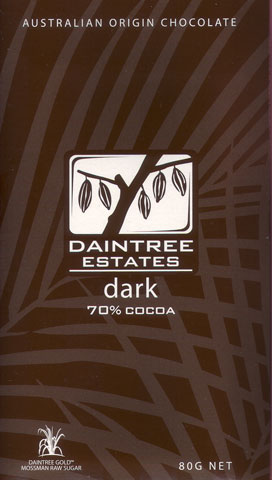 Mossman Australia, home to the rainforest aborigines -- Kuku Yalanji -- the dreamtimers of an animist cosmology. At one time in their own historical reverie, they prepared & ate toxic plants for a variety of reasons, ranging from trial 'n error to ritual usage.

Bouncing Stones Beach in Daintree National Park is sacred to them as a place where females discuss their secret womanly affairs. The beach takes its name because stones can be bounced off one another like bouncing balls. People who remove those stones from the beach are supposedly cursed.

Amidst all this grows Theobroma cacáo, a transplant indigenous to another rainforest located a half a world away and once revered by Mesoamericans who associated it with feminine qualities.

Chocolate in Central America later gave rise to forebodings (perhaps apocryphal) by the goddess Coatlicue (“Serpent Skirt”) in the Virtue on the Hill called Culhuacan (Nahua for “place of those with ancestors”). In Azteca codices, the symbol or glyph representing the toponym for Culhuacan took the form of a ‘bent’ or ‘curved’ hill – a play on the homonym col- in Nahuatl, meaning bent/twisted by old age). There the goddess cautioned how chocolate can make one heavy, tired, weak, old & ultimately hasten death.

Is this what chocolate is really all about? And doubly so when combined with yet another American botanical as this bar is akin to a spiritcatcher that gets caught out on the vines of V. planifolia (better known as vanilla) to make the potion go down even more easily?

Hmmm... all very "interesting" to use a term on the C-spot™ Banned Words List.

Appearance   4.3 / 5
classic mold scored into 6x4 tiles
Aroma   6.9 / 10
DarK?
Fine Snicker's™ Dark or Hershey's Bliss or Dove Promise!
Peanuts & Caramel over maple-candy marshmallow (shades of Colombia) + light molasses
Vanilla overdrive with none of the feral character of another Queensland chocolate
Mouthfeel   12.7 / 15
Flavor   40.6 / 50
as foreshadowed in the Aroma... vanilla-induced chocolate -> Rolo™ caramels -> turns sweet, totally sweet (honeycomb & pineapple) but no getting around the orchid (vanilla orchid, that is) which synthesizes a Fig Newton™ bar (the whole cookie -- dried fruit, pips & wafer included) -> blast of VOG chocolate (Vanilla Oak Giant)
Quality   14.9 / 20
The inaugural bar from Daintree Estates, a potentially significant player on the cacáo scene that vertically-integrates the entire value chain from seed-to-sale in Australia.

As expected, some issues still need to be worked on & ironed out.

For starters, while all the ingredients hail from the Mossman Gorge area of North Queensland, the actual manufacturing of this bar is currently done offsite & down country in Melbourne at a large processor. That crucial gap shows up in this bar as attention to details in the groves goes missing in the factory.

If Zokoko's Queensland, even at a comparatively lighter 66%, represents Australia-cultivated chocolate on the int'l artisan circuit, this with its candied profile should suffice for the Aussie mass market.

Secondly, the processing here feels overly manipulated & the formulation heavy-handed on the vanilla.

More than a scrim but less than a shield, the vanilla-screen obscures as much as it filters any light onto this relative mono-seed of a cacáo & performs only partial bridge-work in linking the various compounds (particularly around the fig tones). It just as much stands out on its own (though nowhere near the miasma of Askinoisie's El Rustico contracted for Zingerman's).

And yet, Daintree-70 delivers pretty satisfying end-flavor on account of a quality cacáo that manages to cut thru the VOG but only somewhat, leaving this bar a bit chocolate-starved.

That should be enough however for chocolatarians to beat a path to Daintree & put it on the map among must-have origins.

A limited successful rollout... the first in what promises to be a line of products from this Australian-grown chocolate company that should evolve with time.