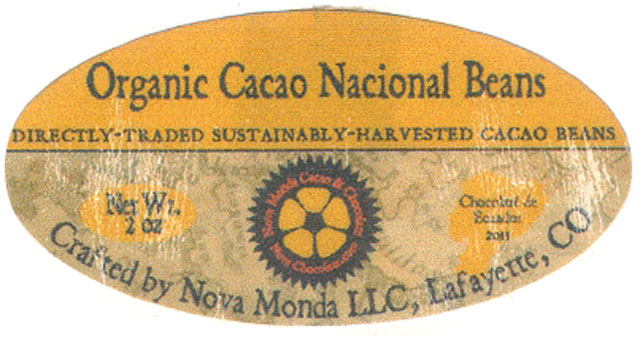 As the company's "Chocolate Czar" -- Joseph Zarr -- explains it, 'Nova Monda' jokingly ploys off the U.S. military usage of the phrase in their tactical exercises for the 'enemy'. As such, the troops at Nova Monda loosely see themselves as members of the New Earth Army.

Pretty apt in light of cacáo's history in the "homeland".

Whatever deficiencies in understanding the Spaniards brought to their initial encounter with Amerinds some 500+ years ago, they compensated for with an intuitive knowledge honed in their own earlier epic of the brutal Reconquista (Reconquest) against a tribally fragmenting Islam: a Zeno-worthy conquest of a thousand battles, sieges & twisted protection plots that led to the rise & fall of the Muslim Caliphate at al-Andalus on their own soil back home over the course of 3 centuries, which served as a dress rehearsal of sorts for this momentous saga in the Americas.

The Codex Mendoza, a near-contemporaneous history, most likely commissioned by the eponymous Antonio de Mendoza – the first viceroy of New Spain (current-day Mexico) — is a prime example of “auto-ethnography” with images by indigene scribes, of colonial collaborators (Spanish annotation), for the benefit of outsiders. It uses the term mezquita (Spanish for ‘mosque’) to describe Aztec teocallis (temples), so demonstrating the degree to which Spaniards viewed their encounters with Amerinds within a framework shaped by their prior one with the Arab world.

That is, once Ferdinand & Isabel got around to giving Cristobal Colón (Columbus) the monies needed for his three ships on their wild overseas venture in the same year (1492) that they also vanquished the Moorish kingdom of Granada & took possession of the legendary Alhambra palaces & gardens, thus ending almost 800 years of Muslim rule on the Iberian peninsula. (Catholic Kings also expelled Sephardic Jews from Spain in that year for good measure.)

All the revolutionary energies that fueled the liberation of the newly united kingdoms at Castilla & Aragon, now fused together as a triumphant new nation-state known as España (Spain), & were freed up from the task of getting rid of the hated Saracens (Muslims) from their fanatically Catholic lands, & so driven by crusading zeal & conviction in providential destiny had only one place to go… Orbe Novo / El Mundo Nuevo / Nova Monda.

The equivalent of our ‘go West, young man’ & apt parallels between America’s post-WWII experience. Particularly a young, bold & fresh leader challenging a nation “before this decade is out”… we went to the moon; they came to the New World.

Seizing upon that chocolate lore & European history in the Americas, this company is setting out to conquer the world of the new era chocolate but striving mightily to do so ethically & responsibly in concert with locals -- in the '20/20 Zone' of the cacáo belt around the Earth -- rather than in combat against them.

Let's hope it succeeds in this quest & we'll all be victorious.
Appearance   4.4 / 5
small to mid-sized; slightly flatter than plump; seeds of this variance by no means easy to work with;
papyrus-like skins however are easy-to-peel (sign of good post-harvest & roast)
Aroma   8 / 10
a nut house gone bananas, including even a li'l ferment-tang ala beer on the pub floor sprinkled with sawdust
Mouthfeel   12.3 / 15
Flavor   44.7 / 50
substrate cocoa -> nuts as promised in the Aroma (rather raw at this point) -> turns savory (greens & legumes, almost a mild ratatouille; superb) in Worcestershire sauce -> pushes the aforementioned nuts into roasted Brazil nuts territory -> mite dirt + mushrooms -> sour ping mixed some bittering -> regains composure with glancing mango & soft banana -> minor stringency
Quality   17.4 / 20
Well-roasted. Really curbs the strident aspects of its raw parent just as this shadows that pretty closely in terms of progression & sequencing for very much a 'like father / like son' relationship.

The mid-palate especially outstanding with those savored FXs... a cunning signal of the tips & tricks this label has up its sleeve.

A genotype without any apparent highs, nor lows either, to wonder just how Nacional these stones are.

Whatever their precise lineage, Nova Monda carefully tends to the craft, from the tree to the post-harvesting, & all the way thru to the processing. This company means business.