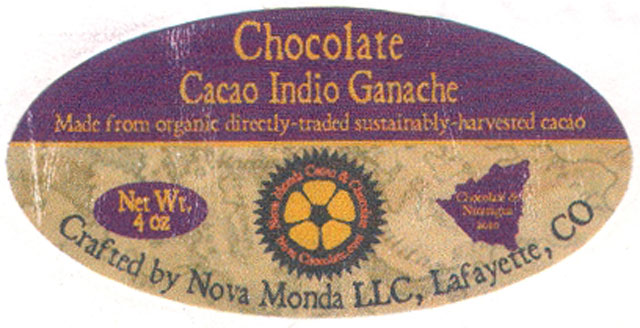 Impact
What is this stuff? A spread? A dip? A sauce? Fudge, móle, ganache, fine frosting... some lotion, gel or face cream?

Really now, what is it?

A: Simple spreadable stuff... but in the deep chocolate vein (notwithstanding the rather paltry 54% cacáo-content) & different.

Nova swaps out adding any cocoa butter for expeller-pressed coconut oil. Not quite a solid, coconut oil can be likened to water's various phases (liquid / solid / vapor). It reduces the melting point of a chocolate by about 10ºF (noticeable in the Mouthfeel), thus galvanizing a quicker release.

Very clean too, this particular oil modestly imparts its own flavor to taste almost clarified, serving more as a canvas that absorbs the cocoa compounds, then carries them forward beyond their weight in cacáo-content... however rapidly.

Despite that, the length is not entirely short... nor very long either; a middle concourse of sorts.

Otherwise, Nova's approach calls for a suitably simple process: out of the oven & into the grinder & that's about it.

A real crowd-getter that only looks 'quick 'n easy' because a lot of preparation has gone in behind it to get the sensory profile right.