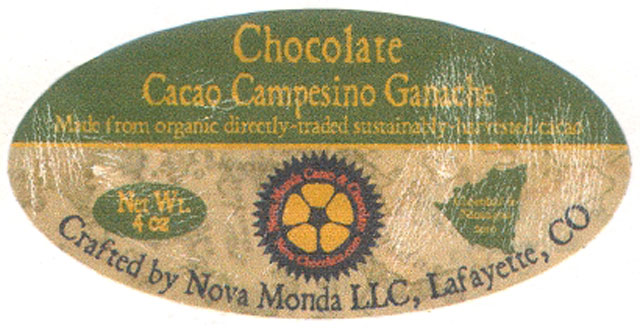 Impact
Nowadays whole expeditionary forces fan out across the tropics in a hunt to recover botanical treasure that the quest for finding ever finer cacáos which can be transformed into chocolate sometimes approaches the magic heights of chasing rainbows while riding a unicorn.

Only rarely are they found.

Nova Monda takes the mission up a notch (ethical, organic, scientific & localizied as much as possible) in a place of considerable chocolate lore -- Nicaragua.

That they're coming close to retrieving the metaphorical 'pot o' gold' in this jar of spreadable chocolate makes their journey all the more worthwhile... knowing they're doing some good while doing pretty well.

Aroma   7.2 / 10
manly: smoked cocoa, creosote & leather gives off intrinsic vanilla (none added) for caramel analogies
Mouthfeel   11.6 / 15
Flavor   44.1 / 50
smoked cocoa carries over from the Aroma -> green walnut -> herbal cache at the fringe -> lowers the curtain on burnt caramel
Quality   16 / 20
That Indio Cacao which screams "CHOCOLATE" forms the basis of this blend, along with a couple other seed types. This then becomes its reverberating echo.

Almost undifferentiated in its flavor. About as Naked as it gets; bang-on chocolate note, & nothing but, of hi-CQ (for Chocolate Quotient free of many or sometimes any over / under tones).

Classic earth-cocoa that even some pros would mistake could only come straight out of West Africa until remembering that the Americas is where it all started in the first place.

Though merely 54% cacáo-content, both the smoked roast & the roughly 23% coconut oil combine to drive this well into mid-70% territory on the palate, leaving the remainder of cane sugar to an ever shrinking tract of perception.