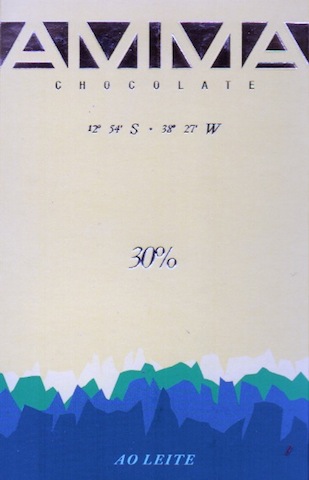 Impact
Every once in a blue moon a bar so fertile & strikingly original comes around to boggle the T-buds ('T' for Taste). That fulfillment of the eternal desire to be wowed. Every chocolate ever opened starts with such hope.

Spoiler alert: this is not that. At least not quite. But on this Leap Day 2012, an extra bonus awaits those who take the leap of faith.
Appearance   3.9 / 5 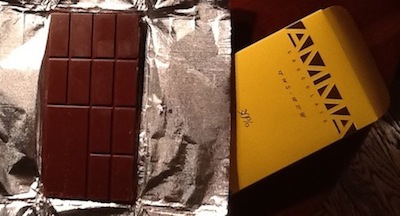 A reducing Milk Chocolate bar; meaning, it breaks down into its progressively simpler constituent parts over the course of the melt until it pulls off a recombinant gestalt by the end so that, like its 45% sib, this finishes well; exceedingly well.

The sequence running from objectionable... to inoffensive.... then inviting & welcome as the troubles lose themselves in each other.

All the same it took that long eventually to resolve the integration issues, the substandard milk powder, & the spotty technique which this sturdy cacáo overcomes. Amma then leaves the task of finishing up the job to the consumer... by curing it for good in the oral chamber.

The reward is worth the work.