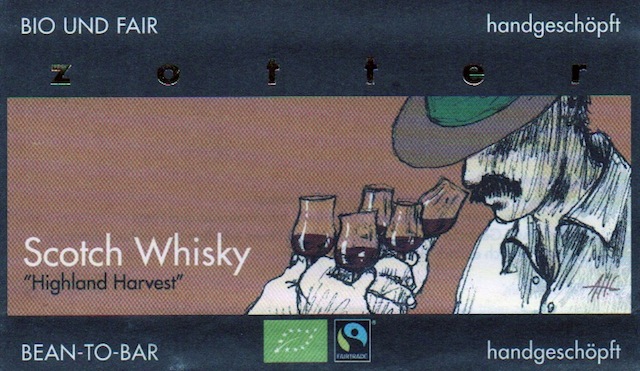 Year ago, starting in 2004, the C-spot® hoisted weekly chocolate flights at The Brandy Library in Manhattan's Tribeca district attended by local chefs & regulars (thank you, Flavian, Evan & the crew). It discovered then what this bar re-confirms now. Namely, that chocolate & double or triple distillates meld spectacularly into a confluence of the highest order. (Recommendation: imbibe first to allow the vapors to initialize & infuse the melt.)

Both give themselves up to become so manifold it requires calling on that most original English voice to take root in the New World -- Walt Whitman -- who encapsulated the obliteration of ego- unto meta-self with cosmic sensory overload in Section 51 of "Song of Myself":

“I am large, I contain multitudes” 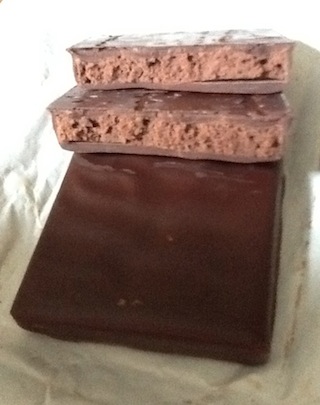 A 'chocolate burn-off' (considering the hard liquor) pitting these two bars against one another seems apt since they're well-matched. Both contain a drop or two of milk; some vanilla; & a glucose sweetener. Hmmm, suspicious formulations. Chocolate espionage at work?

The main difference: Coppeneur adds chili pepper to its mix but that appears as a subtle (even extraneous) accent rather than any searing aggression. Zotter's selection creates plenty of radial warmth without the need to resort to peppered heat.

The other distinction between them: generally superior ingredients here. Zotter employs a couverture that affects more synergy than Coppeneur's.

He measures twice / pours once for near-perfection in a marked improvement from his topped-off Marc de Champagne. 10% Whisky in this formulation sounds overbearing except the fine grade Scotch pairs with a solid confection to counter, proving the motto luceo non urn (shine, no burn).

Finally, a key element here is the salt, harkening back to seas lashing the whisky as it just amplifies the marriage of flavors.

More than a bar but a brilliant dram of chocolate. And a stud.