Impact
Crocodile Whisperer: A Trans-species Romance Twixt Chito y Pocho
Gilberto “Chito” Sheeden made friends with the crocodile Pocho after finding him with a gunshot wound in the left eye on the banks of Costa Rica’s Rio Parismina. Chito enlisted the help of several pals to load the massive reptile (15 feet long) into a boat.

"When I found Pocho in the river he was dying, so I brought him into my house. He was very skinny, weighing only around 150 pounds (well below his normal body weight of over 1,000 pounds). I gave him chicken & fish & medicine for 6 months to help him recover. I stayed by Pocho's side while he was ill, sleeping next to him at night. I just wanted him to feel that somebody loved him, that not all humans are bad.”

It took years before Chito felt that Pocho had bonded with him enough to get close to each other. “I found out that when I called his name he would come over to me."

At one point, Chito left the croc in a lake near his home in the lowland tropical town of Sarapiqui. As he turned to walk away, to his amazement Pocho got out of the water & began to follow him home.

Thereafter they stayed together for the remainder of their 20-year relationship… til death do part: in October 2011 Pocho died of natural causes.

Here's a bar from Costa Rica to feed a happy croc: both a li'l raw & a li'l home cooked. 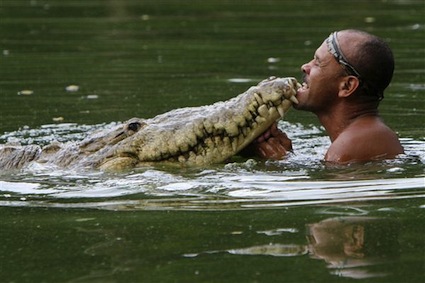 Very judicious use of Nibs in this formulation.

Nibs -- whether "raw" or, to a different degree, roasted -- retain a cocoa's latent flavor potential intact for some coherent notes. It serves to ameliorate the ragged edges of the underlying chocolate in this bar, a chocolate which expresses randomized flavor because it is underdeveloped (due to unroasted) though refined (in a grinder / conche).

Added up, it oddly presents a sort of half-raw / half-refined approach. And all of it together, 'not too bad'.