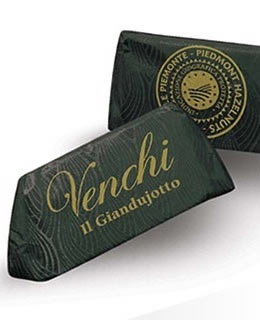 Impact
The immaculate confection
Appearance   4.7 / 5
shape of an upturned boat capsized as a half-domed monolith that launches a thousand obsessions to a nirvanic TASP pleasure center
Aroma   9.1 / 10
a gusher... just blows the wrapper off & bleeds rich hazelnut oil right from the Piedmont
Mouthfeel   15 / 15
Flavor   46 / 50
more than a flavor - a sensation rocking the pants off making your day; 1st the texture hits you - shockingly soft, the center ever holding yet infinitely yielding... a blissed-out free-fall in a dream-state of gianduja all the way, baby... swathed in a dark Milky Way chocolate blanket on the outside of the event horizon -> vanilla sends taste buds spiraling inward to ecstasy, multiplying energetically toward the warm mass where singularity is captured at the core w/ no fiissures whatsoever, the separation between elements nonexistent, the zero-point where all becomes a Dufoux-like 1... -of-a-kind -> resounding hazelnut-booms at the finish pound the senses & produce a quantum leak in the central nervous system ripping reality back into the body
Quality   18.4 / 20
2>1 after all. Venchi resulted from the merger in the early 20th century between Talmone and Moriondo & Gariglio, both among the pioneers of gianduia in Turin, Italy.

Among the best chocolates in the world, period.