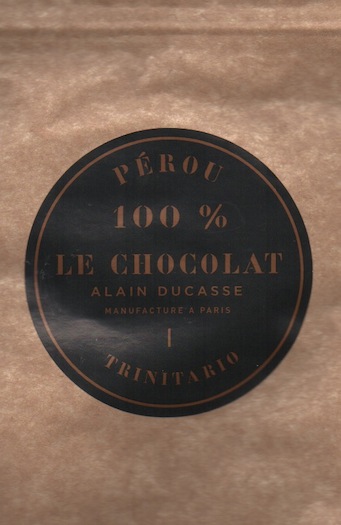 Impact
The emails & txts flooded in from NYC, Silicon Valley, Israel, Chile & even China (yep, Asians are coming to chocolate). Parisian foodies splumed all over their blogs & global chocoheads drooled all over themselves... all over M. Alain Ducasse.

It's hard to overestimate the amount of branding & clout with which Ducasse arrives on the scene. Substantial to say the least & to state the obvious. Perhaps no other artisan chocolate maker has had so many resources to throw at it straight from the gate. Indeed, in a sign of just how resourceful, the venture is part & parcel of the Alain Ducasse Enterprise.

The press kit alone -- enough to cost a small fortune.
The magasin / store, replete with vintage equipment -- a handsomely dear sum. (As they boast: "heavy steel gates with brass handles once guarded the Bank of France".)
Add in the goodwill behind the name itself &, well, it's some of the mostest money can buy.

Meanwhile the rest of the field labors away mostly by trial & error, except for those who can afford self-promoting consultants (few of whom ever ran a successful choc operation themselves; then again, neither have most critics & judges at awards shows save for guys like Georg Bernardini). C'est la vie as they say.

With so many advantages comes responsibility... to get it right... right from the start. Hence, the C-spot® has suspended its 2 kewl 4 skool policy which proscribes reviewing brands practicing their craft for less than 2 years, lest beating up on a barsmith before his or her time. With Ducasse's livelihood not at stake, there's no compunction over taking him on.

Restrictions lifted, hysteria aside, let's now rip into this & several more to follow in pending Daily Reviews... with relish. 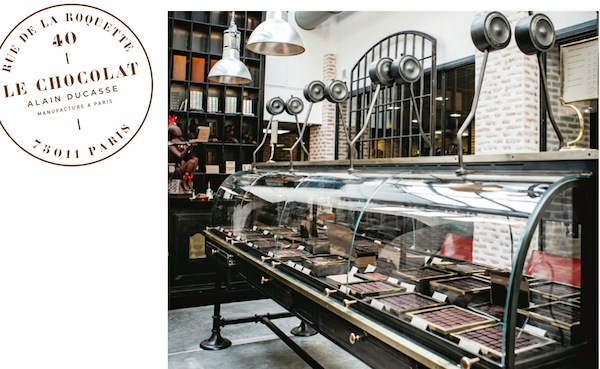 With an air of confidence & culinary experience at its back, Ducasse plunges into this daring 100 -- free-bar'ing it wihout any sugar whatsoever. The equivalent of walking around completely naked. Easy to do in the rainforest; much more self-conscious in the city. Takes real cajones, or... well, nothing quite translates in French, for an upstart barsmith to release a completely unsweetened chocolate. Then, again, Ducasse ain't just another bean-to-bar grinder.

Celeb chef; household name in his home country; man of means; he, just a figurehead in this really, who lends his fame & his 'oo-la-la' sense of wonder to it all with script like this: "Chocolate is a promise of bliss, to which we voluptuously relinquish ourselves. It bewitches me to an ineffable point. It opens doors to imagination & creation."

Meanwhile, too busy himself as the Artistic Director, others toil away at the real craft, especially Nicolas Berger.

Texture suggests a curbed conche placing the onus of flavor development on roasting. It imparts a sensational first half (possibly related to a storage issue in burlap sacks; so be it) which, if sustained, would vault this bar in the stratosphere of ratings. Alas, the profile falls back to Earth but generally in a good spot & far from indurate like so many other unsweeteneds.