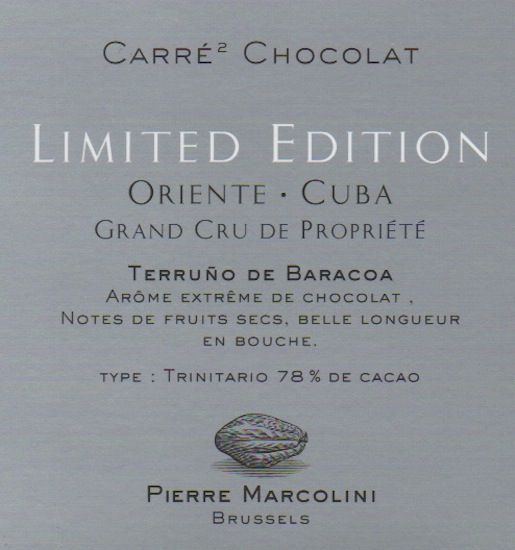 Impact
Cats on average spend ⅔ of every day sleeping. So a 9-year old cat has been awake for only 3 years of its life.

The Cuban cacáo industry has also been slumbering as of late compared to other destinations on the chocolate map, lying kind of fallow next to the big cigar dogs on the island. Maybe that partially explains why it produces relatively fewer modern hybrids than the rest of the world, relying more on traditional growers' selections instead.

Which all translates into some old-time flavor... so good that it even surprises Cubans who are re-awakening to it. Might even rouse Hatuey, the Taíno cacique considered the 1st national hero of Cuba, to moderate his justified scorn of the Spaniards who holed themselves up in a fort at Baracoa -- the site from where Marcolini sources the cocoa contained in this bar.

Oriente Cuba -- a considerable chocolate if not quite heavenly, which would suit Hatuey just fine. When asked prior to being burned at the stake if he'd like to go to the Christians' afterlife paradise, he reportedly replied that if there's any Spanish in heaven, he prefers hell.
Appearance   3.6 / 5

Aroma   7.8 / 10
traditional Cuba tobaccocoa scents trans-substantiated into a wooden countenance by a tiny little orchid that leaves its own huge imprint -- vanilla
in other words, it signals the return of the VOG (Vanilla Oak Giant)
snorts up chocolate hash
Mouthfeel   13.1 / 15
Flavor   44.9 / 50
soft choc beautifully melded with vanilla -> shy fruit (star fruit) -> cane sugar to white rum -> plantain -> light pineapple -> another chocolate bang attended by fig & hazy tobacco -> stringency from earlier rum re-combinates a parting shot of dried mango -> dry wood down the gullet -> roasted almond afterglow
Quality   16.5 / 20
Inordinately sweet for 78%, & rather reclined too. No bitterness at all til the wooden stemwinder at the very end; no harshness whatsoever in fact before then.

Credit Marcolini's customary technique of generous cocoa butter for achieving much of that as well as his messaging this liquor in the processing. He also masterfully incorporates vanilla to entrain all the compounds while imprinting its own perfumes.

It spares just enough overhead without suffocating the bar for offsets -- from starfruit to almonds -- that register at the point of delicacy; every one of them at a low hum.

Cuban cacáo inhabits a generally narrow Flavor range but, yet again, a favorable one.