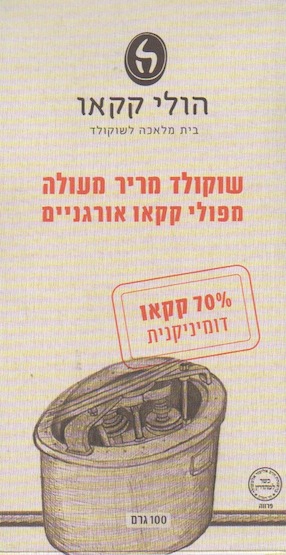 They all generate flavors to cause a spontaneous meditation upon the Latin e pluribus non unum sed plures ("out of many comes, not one, but more").
Appearance   4.7 / 5

Mouthfeel   12.2 / 15
Flavor   46.8 / 50
melon forms a bridge from the Aromatics -> strip cocoa triggers a quick progression of sapote -> deeper red (strawberry) -> crossed by a browned fruit (dried apricot) -> stuff happening fast...
coffee + a big pounding cigar to numb the lips
settles-in some as butter waxes up creamed plantain which, with that café, makes for some mocha latte -> brief but turgid molasses -> shuts down roasted vanillAlmondine
Quality   17.6 / 20
Another in a proud line sourced from Conacado in the D.R., a certified co-op of 8 or so "bloques" (properties) that collects stamps (Fair-Trade, organic, et. al.). the C-spot's® Chocolate Census houses several such Conacado bars, perhaps none better than SOMA's (because it ranks as one of the great bars ever... from anyone / anywhere).

This chocolate by Holy Cacao follows closely in its wake.

Fast-paced fab-evolution defies a halting Texture (not to mention the Aroma).

Tremendous velocity & range in fact, especially over the the first half. Even when it slows down, this still retains plenty of fuel for flavors to keep coming. A dark cast of stellar highlights.

Clearly lots of cacáo diversity from this single-origin. Enough to assemble a mini-U.N. of flavor, or at least the Security Council sitting around one bar.