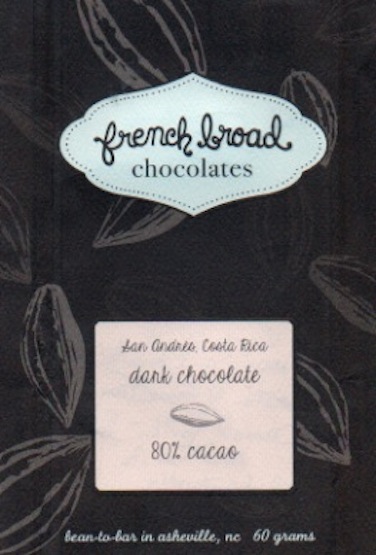 Here, a bar by French Broad which cuts against the grain of that reputation.

This along with Felchlin's qualified & Anonymous's partial (review pending soon) success, all signal that the chocolate tides in Costa Rica are churning & turning for the better.
Appearance   4.6 / 5

Aroma   7.2 / 10
wooded, even forested, photosynthesis all about… with a buttery-leather saddle back
pretty recessed for the percentage
Mouthfeel   11.8 / 15
Flavor   44.5 / 50
quick fruit lip (loganberry) -> coffee grounds in topsoil (all good) -> fruit backs-in to flirt on the fringes, then comes fore to veil the profile along with a scrim of tapioca… eventually becomes the centerpiece as a sweeter duku-fruit flare -> tannic mocha -> outlines chalk & burlap
Quality   17.3 / 20
Another 80%.

Those juicy volatiles sweeten this beyond a quintile of sugar.

French Broad stepping up into the heavyweight division.

San Andrés, south of Límon, near San Clemente, along the Caribbean coast of Costa Rica. There, on a stunning hilltop bluff overlooking the sea, a central fermentary for the area's cacáo, & agro-tourist magnet attracting cruise ships, prospers. It stands as a transcultural fellowship between Jael & Dan Rattigan of French Broad with a lifelong resident -- the highly resourceful & very trustworthy Daniel Enríque South-South (yes, both parents' separate surname is the same… please, no questions or assumptions). He tends to an operation (aptly named Cacao South) in opposition to large brokerage outfits that pay growers with IOUs (quite the one-sided bargain).

This bar projects low overall amplitude but so well-behaved; the bitters subsumed into the folds of flavor-contour whose curvature flexes quite gently for the percentage.