Impact
Just peach blossoms waiting to be bruised & battered by the falling giants of the rainforest.

Miraculously they survive the crush.
Appearance   2.8 / 5

Virtually all of Costa Rica (CR) sits rich in biodiversity. That FInca La Amistad, from whence the cacáo in this chocolate originates under the proprietorship of Juan Büchert, lies within the buffer zone of Tenorio National Park to the country's northwest simply condenses that abundance.

Truth be told, though, very little to nothing has ever emanated from CR in the premium chocolate world worth noting. The combination of oddly unsatisfying terra (however diverse) &, moreover, suspect genetics (due to the nearby CATIE seed bank & its intense breeding programs that privilege cacáo designed for production & disease-resistence rather than Flavor, turning a once-proud & noble cacáo culture into a cocoa wasteland). Any CR which grabs attention owes largely to the workup of the barsmith who optimizes or imparts a maker's mark on the bar. The best example being early Steve De Vries.

Unlike many barsmiths nowadays that issue single-origin chocolates as if playing some spin-the-globe roulette, Felchlin proceeds with its Grand Cru line only after careful due diligence & planning.

Heretofore untasted hedonics from CR. Most significantly peaches, to recall the halcyon walks of Jamaican cacáo. Positively stunning. Doubly so considering that such fragile tags emanate in & around & thru a forested flavor redoubt (owing in some part to the laurel used for fermentation boxes). As though Felchlin took a peach tree & shoved it whole into a bar -- roots, trunk, bark, branches & leaves attached, along with the drupes too of course.

The highs rather weak, the mids & the lows quite strong, in oppositional character: subtle & soft peach versus hard tall wood. And while the lumber hammers down, the fruit never entirely submits. The sweetness-to-size ratio naturally favors the wood; but the fruit just succulent enough to serve at least as a resilient offset to the harsher elements.

Except for those sweet accents, this would be just another plank from Costa Rica. Because of them, the way out of the country's chocolate morass tastes possible.

If CATIE, Amistad, & Felchlim re-proportion the profile, it could be to an important addition to the global chocolate library. 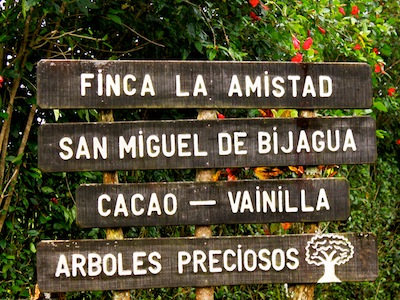