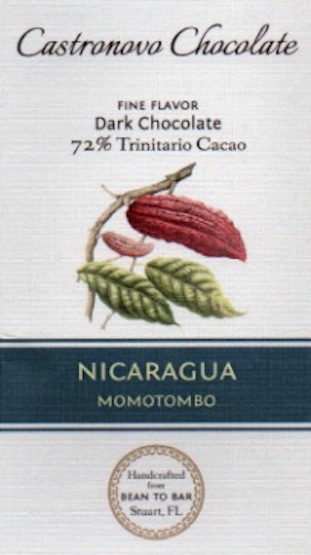 Impact
Introducing Denise Castronovo to The Chocolate Census, whose surname graces this already polished, indeed elegant, label (including though not limited to little but thoughtful appointments such as an adhesive seal on the paper-backed foil which eases the re-wrapping of any unconsumed portions).

A rara avis on 2 fronts, Denise a) operates in the challenger-climate for chocolate of Florida (where the potential for meltdowns rises exponentially in The Sunshine State) & b) is a woman in a field dominated by men. Who knows if the reverse of 'behind-every-successful-man-is-a-woman' might also be true, she nonetheless joins a small but growing cadre bringing diversity to the chocolate industry, especially the artisan end of it.

Given all the dedication & striving required to craft & distribute premium bars, her arrival sends a propitious sign in these generally harsh times (that often feel of every-person-for-themself), in keeping with the Cheyenne proverb (who know something about adversity) that a nation is not conquered until the hearts of its women are on the ground.
Appearance   4.2 / 5

Profile contrasts with the lineage printed on the package (re: "Trinitario" -- a catchall mob term when it comes to cacáo genotypes even as a historical migration between Nicaragua & the home of Trinitario in Trinidad makes it possible). This tastes an orphan of but one (seemingly incompatible) parent rather than any hybrid. The promised walnuts in the liner notes never really materialize unless walnut has a butt, in which case this bar inflects walbutts.

The only cross to this simplex of monotone smoked-cocoa flavor: it disorients of PNG or perhaps Fiji except for the controlled manner of that smoking. Hence the hi-Roast metric (upper right corner). Apparent yet restrained for some to consider it a natural characteristic. In other words, a taint that works.

Castronovo attributes the trait to "volcanic soil". It's entitled to its sci-fi interpretation & maybe so because as one Nicaraguan insider says Momotombo is like getting cacáo from the Sahara, a volcanic mountain with the same environment as the planet Mars. Greater likelihood that this originates in Mombacho, a region comprising mostly mutts interspersed with very sporadic finds of heritage Criollo in remote pockets. With the specialty trade continually opening up, let's hope the locals identify & breed better varieties, as well as hone their post-harvest methods.

Clearly an abundance of fermentation & drying issues & maybe storage too. Machine dried probably using wood or perhaps thanks to the smoked-batshit (soon a new exotic superfood no doubt) that got all over the cacáo in the area's warehouse. But shaped & refined enough at the processing stage to get by. Beneath the detectable flaws, this seed lot comports generally with those from the central part of the country around Matagalpa rooted primarily in Amelonado plantings: appreciable CQ (Chocolate Qquotient or basal chocolate flavor) & solid if basic quality.

Pairing with a cognac or a stout shades it ever more effectively.