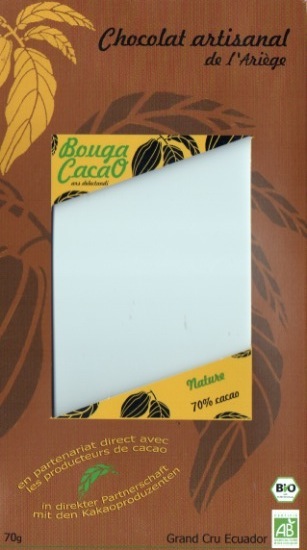 Impact
Ecuador, despite some sterling pockets of cacáo gems few & far between these days in the land invaded by vapid clones with model numbers such as CCN-51, shapes up as the crab bucket of chocolate.

Yep, so many of them now enter the int'l market trying to claw their way up the rim to escape but they keep climbing on top of one another & falling back, including some good ones because misery likes company.

That's Ecuador. And this bar squirms in the pile.
Appearance   4 / 5

black tea
tobacco
smoking wood chips & musty slippery elm strands
Earth
Mouthfeel   11 / 15
Flavor   40.3 / 50
follows-on from the Aromatics, very Earthen with a slow-building undercurrent of rather indeterminate sweetness -> acorn & grilled walnuts -> that earlier sweet spot struggles to portray blackberry, fails, & recedes -> pleasant if bland end
Quality   13.5 / 20
Neither objectionable nor commendable. Just another bar in a long line of such from Ecuador with all the whiff of a private label / co-packer arrangement.

Strange considering that Bouga, a French imprint, superintends this chocolate of Ecuadorian cacáo but settles for such middling produce. Selecting a higher grade should be the least to expect from it since another company actually processes the cacáo: Tulicorp.