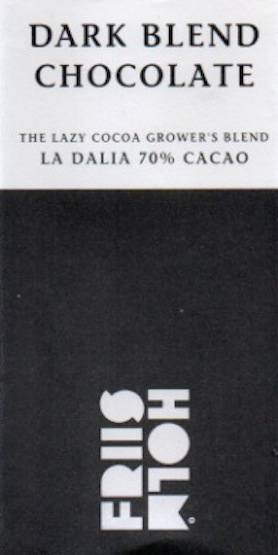 Impact
The Great Dane Mikkel Friis-Holm captures more treasure here from the French House of Bonnat that he begins to take on the myth of Ragnar Lodbrok -- the Viking hero who spent much of his life taking one country after another.

Lodbrok’s favorite tactic involved showing up on holy days, as in 845AD when he arrived in Paris on Holy Saturday with 120 ships. By some accounts, he accepted a "tribute" of 7,000 pounds of silver from French King Charles the Bald.

In receiving however many pounds in bars as payoff from Bonnat, Friis-Holm ends up on the sweet end of the deal in this budding chocolate alliance.
Appearance   3.8 / 5

Nicaliso
The dependable NIcaliso cacáo, most recently sampled from A. Morin, & whose benchmark to date may well remain Duffy's with whom Friis-Holm seems to engage in an arms race to see who can re-up the Ingemann-brokered cocoa from Nicaragua the most. Both brands cover the country about as thoroughly as any other. So much so that Friis-Holm designs house blends out of this origin's single-varietals (the stringent Dark-Blend).
This almost follows La Dalia's suit (above)… a atatic first-half to this bar however drives into a confluence of subtle channels that build & accumulate into a rear manifold.
Though short of Rugoso's stature, a solid addition to the Friis-Hiolm catalog.
INGREDIENTS: cocoa mass, sugar, cocoa butter