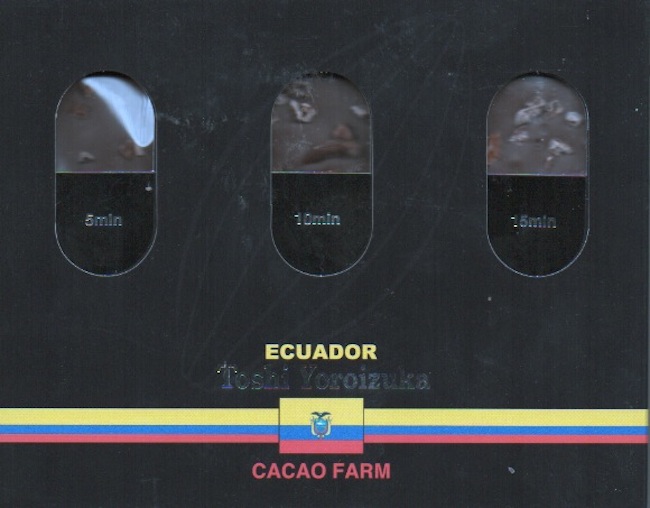 Impact
In Japanese culture, seppuku (“stomach cutting”) was a ritual suicide performed by warriors (usually Samurai) rather than accept the dishonor of being captured. During the ritual, the warrior would slice up his abdomen & stretch out his neck, then one of his comrades would behead him.

Though banned in the 17th century, the practice persists today…. perhaps upon ingesting some of these bars.
Appearance   4.6 / 5

15 mins
more of the same as the 2 up above except for a slightly more defined fruit trace -> rubber
Quality   -- / 20
An expo on roasting curves similar to the experiments advertised by Fresco.

The difference between these 5-minute intervals equates to very little differential in flavor -- each pretty cold tasting -- which begs: did anyone actually turn on the heat at all? Most successful roasts require yet an additional 5 more minutes anyways which begs: where's the 20 mins bar?

Beyond that, the overarching profile exhibits all the waterlogged prowess of CCN. On the face of it Toshi Yoroizuka owns its own cacáo grove in Ecuador.