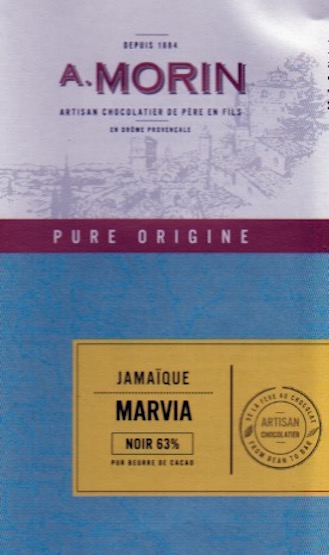 Marvia
cocoa in its sub variant guises (chocolate -- fudge -- brownie) -> carob & coffee -> soft woods -> fruit murmurs (guineps) quietly spread over the palate (into peaches -- ackee) until joining the forefront as a chocolate-berry (terrific) -> close cap vanilla-cocoa
Quality   17.1 / 20
Guatemala
Despite its overall geography, Guatemalan cacao botanically belongs to the Caribbean basin.
Rare misfire here for A. Morin attributable largely to a handicapped origin -- once-proud Guatemala still trying to recover & locate itself in the modern chocolate era. Not a bad bar per se (many worse on the market); just not up to Franck Morin's standards.
Even so, probably the best Dark bar to hail from there in a testament to improvements on the ground &, moreover, the skills of Morin.

Dorun
Cuba
Far from the cleanest cocoa -- Cuba rarely delivers in that department -- & still another exposition that exceeds the seed allotment in an overachievement. Perhaps the most fruit-laden Cuban yet; certainly the only contender to Bonnat's flavor profile for this island cacáo, despite relatively hi-torrefaction. Which means these study seeds can beat the heat & keep on fruiting.

Marvia
Jamaica
Sneaky subtlety.
The opening so dense & claustroflavic to give no quarters but, at just 63% cacao-content, sooner of later the sugar weight is going to be felt & tasted.
Some archetypal Jamaican cacao heritage in the progression (particularly the lighter fruit packs). T'would truly be revealing if they can be maintained at a higher percentage or whether just tilled under by the bigger tannins which also endow this cacáo.