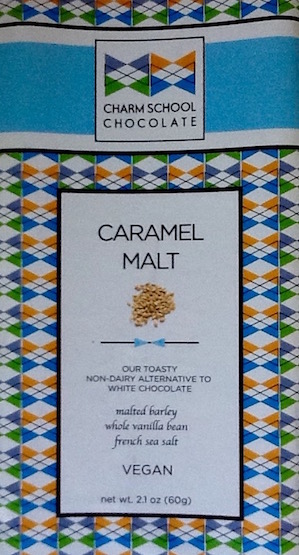 Impact
To be nobody but yourself -- in a world which is doing its best, night & day, to make you everybody else -- means to fight the hardest battle which any human being can fight, & never stop fighting. - e.e. cummings

Some succumb…. unlike Josh Rosen.

After eating thousands of chocolate bars and boxes (some debased beyond defaced) & reading (as well as writing) millions of words on it, including a fair amount of distortions & falsehoods, who'd think the unthinkable that something truly distinguished & distinct could still be unearthed.

Upon reflection, Josh Rosen of Charm School Chocolate seemingly inhabits an alternative world. To paraphrase, in the best way, Aaron Eckhart In the Company of Men, he's a whole new breed.
Appearance   5 / 5

No chocolate to write of (is there even any in there; ahhhh, well, not really*** but 34% supposedly; who cares).

Frays & falls apart at the very end, self-deconstructs & deteriorates but the longish melt until that disintegration fills up with terrific hedonic / hedonism -- so good the anticipated finale builds up to a.... letdown. Even that however just reinforces the preceding goodness.

A- for execution; A for creativity; A+ for charm.